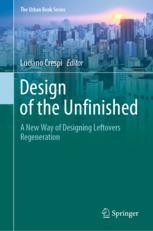 Design of the Unfinished

The book aims to provide city administrators and planners with a tool to accompany them in experimenting with the regeneration of no longer used parts of the built heritage, called leftovers, by adopting an innovative approach. A new and radically different form of project, with the task of proposing a new aesthetic code and a style of thought aimed at creating shelters for nomads of the third millennium.

In the design field, the 21st century will be destined to measure itself against temporariness and precariousness, also in terms of aesthetic practices. Based on this hypothesis, the text identifies the design of the unfinished as the perspective for attributing to the leftovers a character, which is representative of the conditions of the just begun century. Through a transdisciplinary, exhibition-like and reversible approach, the elements of degradation of the existing work are welcomed in the project as a "gift", to be translated into a syntax aimed at giving form and meaning to the internal and external environments, with the inclusion of "additional components".