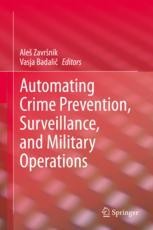 This interdisciplinary volume critically explores how the ever-increasing use of automated systems is changing policing, criminal justice systems, and military operations at the national and international level. The book examines the ways in which automated systems are beneficial to society, while addressing the risks they represent for human rights.

This book starts with a historical overview of how different types of knowledge have transformed crime control and the security domain, comparing those epistemological shifts with the current shift caused by knowledge produced with high-tech information technology tools such as big data analytics, machine learning, and artificial intelligence. The first part explores the use of automated systems, such as predictive policing and platform policing, in law enforcement. The second part analyzes the use of automated systems, such as algorithms used in sentencing and parole decisions, in courts of law. The third part examines the use and misuse of automated systems for surveillance and social control. The fourth part discusses the use of lethal (semi)autonomous weapons systems in armed conflicts.

An essential read for researchers, politicians, and advocates interested in the use and potential misuse of automated systems in crime control, this diverse volume draws expertise from such fields as criminology, law, sociology, philosophy, and anthropology.

Aleš Završnik is a Senior Researcher Associate at the Institute of Criminology at the Faculty of Law in Ljubljana and Associate Professor at the Faculty of Law University of Ljubljana (Slovenia). He was an EURIAS Fellow 2017/18 at the Collegium Helveticum, ETH, in Zurich. In the past, he was a postdoctoral fellow of the Norwegian Research Council at the University of Oslo (2012), and a postdoctoral fellow at the Max-Planck-Institute für ausländisches und internationals Strafrecht in Freiburg i. Br. (2009). He co-managed several international scientific networks of the COST (European Cooperation in Science and Technology) programme that were dedicated to technology, law, surveillance and delinquency on the Internet (e.g. currently Action CA16121 “From Sharing to Caring: Socio-Technical Aspects of the Collaborative Economy” and Action IS0807 “Living in Surveillance Societies” or the Action IS0801 “Cyberbullying” in the past).

His research interest lay in the intersection of law, crime, technology, and fundamental rights. He led a research project funded by the Slovenian National Research Agency “Law in the age of big data: Regulating privacy, transparency, secrecy and other competing values in the 21st century” (2014 - 2017). His most recent scientific achievements include an edited book “Big Data, Crime and Social Control” (Routledge, 2018); and “Drones and Unmanned Aerial Systems: Legal and Social Implications for Security and Surveillance” (Springer, 2015). He organized several conferences in these research areas, for example “Big data: Challenges for Law and Ethics” (Ljubljana, 2017) and “Spy in Sky: Regulatory issues of drones and unmanned aerial systems” (Ljubljana, 2013). He was an independent Ethics Expert with the European Research Council (ERC) and for the REA, the research arm of the European Commission, for Horizon 2020 projects.

Vasja Badalič is a Senior Researcher at the Institute of Criminology at the Faculty of Law in Ljubljana, Slovenia. His primary fields of research are contemporary imperialism and migration. He combines theory with extensive field-work, frequently visiting the Middle East and Central Asian countries, in particular Afghanistan and Pakistan. He is the author of four single-authored monographs, including The War Against Civilians: Victims of the “War on Terror” in Afghanistan and Pakistan (Palgrave Macmillan, 2019).

Before joining the Institute of Criminology, Vasja Badalič worked as a freelance journalist, reporting for Slovenian news media from the Middle East (Iraq, Lebanon, and Syria), Central Asia (Afghanistan), South Asia (India, Bangladesh, and Pakistan), and Latin America (Venezuela, Colombia, Bolivia, and Mexico). His work frequently appeared in Slovenian newspapers and magazines such as Delo, Dnevnik, Večer, and Mladina. He has appeared many times on Slovenian radio and television as an expert on Afghanistan and Pakistan.