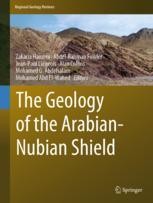 The Geology of the Arabian-Nubian Shield

­This richly illustrated book reviews the geology, tectonics and mineralization of the Arabian-Nubian Shield (ANS) in 27 chapters. It starts with an examination of the ANS lithospheric scale features, explores Mesoproterozoic units and deals with the ANS oceanic stage. Arc volcanism and plutonism, post-collision basins and volcanics are discussed, as well as the younger granitoid magmatism and the deformation history of the ANS. The book provides information on ANS glacial stages and late magmatism. Chapters are devoted to review the transition between ANS and the reworked continent to its south. Finally, it discusses how ANS structures influenced the overall East African Rift System.

Zakaria Hamimi is a Tectonics and Structural Geologist, currently at Benha University in Egypt, and has worked previously at Sana’a University, Yemen (1995-1998) and King Abdulaziz University, Saudi Arabia (2003-2013). He obtained a BSc (distinction with Honors) in 1984 at Assiut University, a M.Sc in 1988 at Zagazig University, and a Ph.D in 1992 in Structural Geology and Tectonics at Cairo University. His research focusses on the tectonic evolution of the Arabian-Nubian Shield via structural/microstructural, paleostress and strain studies, aligned with geological mapping, geomorphology and remote sensing methodologies. His research output exceeds 80 research publications in national and international journals. Besides, He co-edited four Springer's books.

Zakaria Hamimi is the president, and a founding member of the Arabian Geosciences Union, since 2012.  He has been awarded the medal of the Egyptian Geological Society of Egypt in 2015, and the medal of the Arab Mining and Petroleum Association in 2016. His services to the profession include his roles as Associate Editor of the Egyptian Journal of Geology (1998-2002) and the Arabian Journal of Geosciences (2016-now); member of the Egyptian Universities Promotion Committee, Supreme Council for Universities, Egypt (2016-2019); Secretary of the National Committee for Geological Sciences, Academy of Scientific Research and Technology (2016-2019), and later nominated for President of this Academic Committee in 2020; and the IUGS-Representative for Egypt in Cape Town 2016 and Thailand 2017.

Abdel-Rahman Fowler graduated with BSc (Honors, 1st Class) in Geology from Sydney University, Australia in 1977. After experience in the uranium and tin exploration and mining industry in NSW, Queensland and Northern Territory, he obtained a PhD in Structure and Tectonics at the University of New South Wales (UNSW) in 1986. He has instructed in Structural Geology and other geoscience disciplines at UNSW and LaTrobe University, Victoria, and has served at the United Arab Emirates University since 1999. His main interests lie in structural geology and tectonics, but extend to stratigraphy/sedimentology and geochemistry. He has conducted research work in Australia, Egypt, Turkey and UAE, and has published more than 40 papers in international journals and has contributed to books dealing with the geology of the Arabian-Nubian Shield. He has received awards for research excellence at UAEU.

Jean-Paul Liégeois spent his whole academic career at the Royal Museum of Central Africa (RMCA), Tervuren, Belgium. He is an isotope field geologist who has mainly focused on the geochemistry of granitic magmatism and the geodynamics of the Pan-African Orogeny in Sahara. He holds the M.Sc (ULg, 1979) from the University of Liège and the PhD from the University of Brussels (ULB, 1987). His Ph.D was devoted to the transition from calc-alkaline to alkaline granitic magmatism in the Pan-African Orogen in the Adrar des Iforas, Mali for which he received the "Prix Lucien Cahen" 1987 of the Belgian Overseas Royal Academy of Science. He worked in the joined RMCA-ULB Belgian Centre for Geochronology, which he co-directed for 20 years. He mostly worked in the Sahara from the Atlantic Ocean to the Indian Ocean but mainly in the Tuareg Shield, Algeria, Mali and Niger, privileging working in partnership with colleagues and students from the concerned countries. He strongly contributed to decipher the meaning of the high-K calc-alkaline and alkaline granitoids and the terrane structure in the Saharan Pan-African belt and to establish the existence of the Saharan metacraton, as well as the concept of metacraton. He also worked in other parts of Africa especially in the West African craton (Morocco, Mali and Niger) but also in Egypt, Sudan, Somalia, Cameroon and Central Africa. He worked punctually in Europe (Belgium, France and Romania) in terranes having links with the NW- African geology. If his personal contribution was field, geochronology, geochemistry and geodynamics, he always privileged collaboration with specialists in other disciplines, especially structural geology, metamorphic petrology, geophysics and sedimentology, generating a multidisciplinary approach. He has published 120 research articles in international indexed and refereed journals (h= 44) and co-edited several books. He was Regional Editor and Associate Editor of the Journal of African Earth Sciences for 25 years and is member of the Editorial Board of several international journals. He is Officer of the Crown (Belgium) and the laureate of the R. Shackleton Award 2008 of the Geological Society of Africa for "Outstanding research on Precambrian Africa".

Alan Collins is a tectonic geologist who is interested in how the deep earth evolution of the planet has controlled and governed earth surface systems (atmosphere, hydrosphere and biosphere). He is based in The University of Adelaide, Australia, and has worked over the last 20 years on unravelling the Ediacaran-Cambrian amalgamation of Gondwana, working initially in Madagascar, and later in East Africa, Arabia, Ethiopia, Brazil, India, Australia and East Antarctica. Using tectono-stratigraphic techniques, he has helped unravel much of the East African Orogen to produce a model for the collision of Neoproterozoic India with the central Africa.

Mohamed G. Abdelsalam is a geoscientist interested in research and education in structural geology, geophysical applications, and geospatial information sciences. His research focuses on the tectonic evolution of rift systems and orogenic belts, and morpho-tectonics. His research has been supported by the Petroleum Industry, National Science Foundation (NSF), and National Aeronautics and Space Agency (NASA) with a total of ~4.5 million dollars (~50% share). Results of his research are presented in 103 publications (83 peer-reviewed), 91 invited presentations, and 211 abstracts with a total citation of 3070, h-index of 32, and i10 index of 53 (Scopus, March 2020). He taught over 80 classes in the geosciences and geospatial information sciences at UT Dallas (August 2000 – July 2006), Missouri S&T (August 2006 – May 2012) and Oklahoma State University (August 2012 – December 2019). Besides, he has mentored 12 PhD and 14 MS students to successfully complete their graduate degrees. Currently, he is supervising 3 PhD and 2 MS students. He served as the Geosciences Graduate Advisor at UT Dallas between August 2005 and August 2006, the Geology and Geophysics Graduate Coordinator at Missouri S&T between September 2006 and May 2009, and he has been serving as the Geology Graduate Coordinator at Oklahoma State University since July 2013. Additionally, he has been active in the US and African geoscientific communities. He served as proposals evaluator and manuscripts reviewer for many national and international funding agencies and journals. He served as the President of the Geological Society of Africa between 2001 and 2004, and currently, he is serving as the Co-Editor-in-Chief of the Journal of African Earth Sciences, and as a member of the editorial board of the journal of International Geology Review. He was elected a fellow of the Geological Society of America in May 2008 and a fellow of the Geological Society of Africa in November 2008. He received the Missouri S&T Faculty Excellence Award in December 2008. He also received Oklahoma State University Outstanding Graduate Coordinator Award in April 2017.

Mohamed ABD EL‐WAHED is a structural geologist at the Geology Department, Faculty of Science, Tanta University, Egypt. He has graduated 1988 with honor degree, and got the M.Sc degree 1995 from the same department. He got his Ph.D. degree in 1999 from Department of Structural Geology, Institute of Geological Sciences, Wroclaw University, Poland. He joined the Geology Department, Faculty of Science, Omar Al Mukhtar University, Libya, during the period 2005 to 2012. He is a judge member of the Egyptian Promotion Committee. He has worked in many field‐related sub‐disciplines of Earth Sciences including structural and microstructural analysis, geologic mapping, strain analysis, tectonic geomorphology, crustal deformation and remote sensing. He used all these fields to study key areas in the Egyptian Nubian Shield, and to decipher their deformation history. He has co‐published 55 research articles and book chapters in national and international indexed and refereed journals and authored three Arabic books.