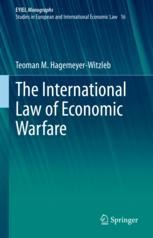 The International Law of Economic Warfare

Since the prohibition of the threat or use of force and the resurgence of (economic) nationalism, economic warfare has become an increasingly important substitute for actual hostilities between states. Its manifestations range from medieval sieges to modern day trade wars. Despite its long history, economic warfare remains an elusive term, foreign to international law. This book seeks to identify those portions of international law that are applicable to economic warfare. What is the status quo of regulation? Is there a jus ad bellum oeconomicum? A jus in bello oeconomico?

After putting forward its own definition of economic warfare, the book reviews historical case studies – reflecting the three main branches of international economic law: trade, investment and currency – to identify pertinent legal boundaries. While the case studies reveal that numerous rules of international (economic) law regulate (specific measures of) economic warfare, it remains to be seen whether – analogously to the prohibition of the threat or use of force – these selective limitations have the potential to coalesce into a general prohibition of economic warfare in the future.

Teoman M. Hagemeyer-Witzleb is a judge serving in the Berlin judiciary. Majoring in international economics, he obtained a (Master’s Degree equivalent) diploma in International Economic Law in 2012 from the Friedrich-Alexander-University Erlangen-Nuremberg. In 2014 and 2016, he took the bar examinations at the Higher Regional Courts of Nuremberg and Berlin, respectively. His research focusses on public (international) economic law. He has (co-)authored various articles and studies, also for the European Parliament and a major European government.