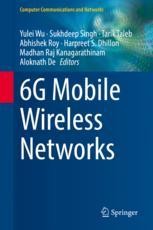 This book is the world’s first book on 6G Mobile Wireless Networks that aims to provide a comprehensive understanding of key drivers, use cases, research requirements, challenges and open issues that are expected to drive 6G research. In this book, we have invited world-renowned experts from industry and academia to share their thoughts on different aspects of 6G research. Specifically, this book covers the following topics: 6G Use Cases, Requirements, Metrics and Enabling Technologies, PHY Technologies for 6G Wireless, Reconfigurable Intelligent Surface for 6G Wireless Networks, Millimeter-wave and Terahertz Spectrum for 6G Wireless, Challenges in Transport Layer for Tbit/s Communications, High-capacity Backhaul Connectivity for 6G Wireless, Cloud Native Approach for 6G Wireless Networks, Machine Type Communications in 6G, Edge Intelligence and Pervasive AI in 6G, Blockchain: Foundations and Role in 6G, Role of Open-source Platforms in 6G, and Quantum Computing and 6G Wireless.

The overarching aim of this book is to explore the evolution from current 5G networks towards the future 6G networks from a service, air interface and network perspective, thereby laying out a vision for 6G networks. This book not only discusses the potential 6G use cases, requirements, metrics and enabling technologies, but also discusses the emerging technologies and topics such as 6G PHY technologies, reconfigurable intelligent surface, millimeter-wave and THz communications, visible light communications, transport layer for Tbit/s communications, high-capacity backhaul connectivity, cloud native approach, machine-type communications, edge intelligence and pervasive AI, network security and blockchain, and the role of open-source platform in 6G. This book provides a systematic treatment of the state-of-the-art in these emerging topics and their role in supporting a wide variety of verticals in the future. As such, it provides a comprehensive overview of the expected applications of 6G with a detailed discussion of their requirements and possible enabling technologies. This book also outlines the possible challenges and research directions to facilitate the future research and development of 6G mobile wireless networks.

Dr. Yulei Wu is a Senior Lecturer with the Department of Computer Science, College of Engineering, Mathematics and Physical Sciences, University of Exeter, United Kingdom. He received his Ph.D. degree in Computing and Mathematics and B.Sc. (1st Class Hons.) degree in Computer Science from the University of Bradford, United Kingdom, in 2010 and 2006, respectively. His expertise is on intelligent networking, and his main research interests include computer networks, networked systems, software defined networks and systems, network management, and network security and privacy. His research has been supported by the Engineering and Physical Sciences Research Council, London Mathematical Society, National Natural Science Foundation of China, University's Innovation Platform (Link Fund) and industry. Dr. Wu serves as an Associate Editor of IEEE Transactions on Network and Service Management, IEEE Transactions on Network Science and Engineering, and IEEE Access, as well as an Area Editor of Computer Networks (Elsevier). He also serves as a Guest Editor for many international journals, including IEEE Journal on Selected Areas in Communications, IEEE Transactions on Industrial Informatics, IEEE Transactions on Cognitive Communications and Networking, IEEE Transactions on Sustainable Computing, and IEEE Transactions on Computational Social Systems. He is a Senior Member of the IEEE and the ACM, and a Fellow of the HEA.

Sukhdeep Singh received his Integrated Dual Degree (Bachelors and Masters degree) in Computer Science from GVU Jaipur India in 2013. He received his PhD in Computer Engineering from Sungkyunkwan University in South Korea in 2016 along with the ‘Superior Research Award’ for publishing the maximum number of SCI(E) research papers during Ph.D. in 2016 from the Electrical and Computer Engineering department. He also received the ‘SKKU bright student scholarship award’. He was part of Brain Korea (BK21) and National Research Foundation of Korea project during his Ph.D. He worked in diverse fields during his Ph.D., viz. eMBMS scheduling, video delivery architecture for 5G, integrating sociology with Next Generation Mobile Networks, D2D communications. Sukhdeep Singh is currently working with Samsung R&D India Bangalore in 5G RAN System design where he is responsible for research and design of O-RAN and Networks Slicing features for 5G Networks. Apart from this he is also heading the research task force of Access R&D group (with 200+ employees) of Network R&D team at Samsung R&D India-Bangalore. He received Samsung Best Paper Award conferred by CEO & President of Samsung Electronics and has also received Samsung Citizen Award (quarterly awards) for four times conferred by MD of Samsung R&D India-Bangalore. He has published more than 25 research articles in his career. He has served as Guest editor in Taylor and Francis IETE journal, General Chair in workshops hosted/will be hosted in IEEE WCNC 2020 and IEEE Globecom 2020. He also served as Technical Program Chair member for IEEE iNIS 2016, IEEE iNIS 2017, ISRO-ACM ICSE 2017, IEEE iSES 2018, IEEE iSES 2019, IEEE iSES 2020 and IEEE iSES 2021. He has been invited as a guest lecturer by University of Toronto, IITs, IIMs and IIITs and keynote speaker at Springers ICIMMI 2019 and IEEE Virtual Talk Series 2020. He edited the world's first book on 6G.

Tarik Taleb received the B.E. degree (with Distinction) in information engineering and the M.Sc. and Ph.D. degrees in information sciences from Tohoku University, Sendai, Japan, in 2001, 2003, and 2005, respectively. He is currently a Professor with the School of Electrical Engineering, Aalto University, Espoo, Finland. He is the Founder and the Director of the MOSA!C Lab, Espoo, Finland. He is a part-time Professor with the Center of Wireless Communications, University of Oulu, Oulu, Finland. He was an Assistant Professor with the Graduate School of Information Sciences, Tohoku University, in a laboratory fully funded by KDDI until 2009. He was a Senior Researcher and a 3GPP Standards Expert with NEC Europe Ltd., Heidelberg, Germany. He was then leading the NEC Europe Labs Team, involved with research and development projects on carrier cloud platforms, an important vision of 5G systems. From 2005 to 2006, he was a Research Fellow with the Intelligent Cosmos Research Institute, Sendai. He has also been directly engaged in the development and standardization of the Evolved Packet System as a member of the 3GPP System Architecture Working Group. His current research interests include architectural enhancements to mobile core networks (particularly, 3GPP’s), network softwarization and slicing, mobile cloud networking, network function virtualization, software-defined networking, mobile multimedia streaming, inter vehicular communications, and social media networking.

Harpreet S. Dhillon received the B.Tech. degree in electronics and communication engineering from IIT Guwahati in 2008, the M.S. degree in electrical engineering from Virginia Tech in 2010, and the Ph.D. degree in electrical engineering from the University of Texas at Austin in 2013. After serving as a Viterbi Postdoctoral Fellow at the University of Southern California for a year, he joined Virginia Tech in 2014, where he is currently an Associate Professor of electrical and computer engineering and the Elizabeth and James E. Turner Jr. '56 Faculty Fellow. His research interests include communication theory, wireless networks, stochastic geometry, and machine learning. He is a Clarivate Analytics Highly Cited Researcher and has coauthored five best paper award recipients including the 2014 IEEE Leonard G. Abraham Prize, the 2015 IEEE ComSoc Young Author Best Paper Award, and the 2016 IEEE Heinrich Hertz Award. He is the recipient of the 2020 IEEE Communication Theory Technical Committee (CTTC) Early Achievement Award and the 2020 IEEE Radio Communications Committee (RCC) Early Achievement Award. He was named the 2017 Outstanding New Assistant Professor, the 2018 Steven O. Lane Junior Faculty Fellow, the 2018 College of Engineering Faculty Fellow, and the recipient of the 2020 Dean's Award for Excellence in Research by Virginia Tech. His other academic honors include the 2008 Agilent Engineering and Technology Award, the UT Austin MCD Fellowship, the 2013 UT Austin WNCG leadership award, and the inaugural IIT Guwahati Young Alumni Achiever Award 2020. He currently serves as a Senior Editor for the IEEE Wireless Communications Letters and an Editor for the IEEE Transactions on Wireless Communications and the IEEE Transactions on Green Communications and Networking.

Abhishek Roy received the B.E. degree from Jadavpur University, India, in 2000, the M.S. degree from The University of Texas at Arlington, in 2002, and the Ph.D. degree from Sungkyunkwan University, in 2010. He is currently working as a Senior Technical Manager at MediaTek Inc. USA. Prior to working in MediaTek, he worked for Samsung Electronics at their head quarters in Suwon, South Korea for 12 years. He has more than 15 years of relevant experience in design and performance analysis of wireless networks, spanning across different countries. He has strong professional skills in 4G/5G/6G wireless system design, New Radio unlicensed, the IoT, cloud RAN, network modeling, and simulation. He has been published in more than 80 top-notch international journals and magazines (IEEE), coupled with ten patents and standards contributions. He served as technical program committee members and track chairs of International wireless conferences, special Issue journal editorial boards and PhD thesis committees. He is also winner of Best Employee, Best Masters and Best Paper awards from company, University and International Conferences.

Madhan Raj Kanagarathinam received the BE degree in computer science and engineering from Anna University, Chennai, India, in 2012. He is currently pursuing his MS in Indian Institute of Technology (IIT) Madras. He has nine years of working experience in design and development of TCP/IP protocols, Multipath TCP and UNIX flavored operating systems. Currently, he is working as a Senior Chief Engineer for Samsung R&D Institute India Bangalore. Previously, he worked as an Engineer with Aricent Technology (India) Private Limited. He is the author of 15 articles, and more than 25 inventions. His current research interests include communication and network which include Pre-6G/Beyond 5G, Next Generation Mobile Network, software defined network architecture, wireless transport layer protocols, and cross layer optimization technique. He is also winner of IEEE Bangalore Young Technologist of the Year 2020. He is a senior member of the IEEE, and a member of the ACM.

Dr. Aloknath De is Chief Technology Officer of Samsung R&D Institute India, Bangalore since 2011 when he initiated 5G research activities as his first assignment. As Corporate Vice President of Samsung Electronics, South Korea, he has also been responsible for Samsung’s IoT Data Platform and Intelligent Services. Dr. De received his B.Tech. from Indian Institute of Technology (IIT), Kharagpur, M.E. from Indian Institute of Science (IISc), Bangalore, and Ph.D. from McGill University, Montreal. Prior to Samsung, he has held progressive responsibilities in Bharat Electronics, Nortel Network (Montreal), Hughes and ST-Ericsson where he was Country Manager and a Board Director. Additionally, he served as an AICTE-INAE Visiting Professor in IIT-Roorkee and an Adjunct Professor in IIT-Delhi between 2005 and 2011. During 30 years of corporate life, he has been solving complex problems: from Radar Systems to Futuristic Devices, from Rich Communication to Machine Understanding. He has 25+ patents granted/filed and 50+ research publications. For technology leadership, Dr. De has received numerous accolades: Alexander Graham Bell Prize (Canada), IETE Memorial Award, IDC Insights Award, Nasscom AI Game Changer Award; and also from IESA for 'Innovative Product', Zinnov for 'Intrapreneur of the Year', Assocham for 'Tech Leader of the Year' and TechCircle for 'Business Transformation'. He is recognized as one of the 'Most Influential CIO/CTOs of India' and is Invited Speaker in 'Thought Leadership' forums. His meticulous drive has made Samsung India center an Innovation Hub with repeat recognition through 'National IP Award', and 'Great Place to Innovate' award. He leads Samsung's deep partnership with and strategic investment in Indian Startups. He has been contributing to global technology standards and is current chair of OCF India forum for IoT. As Chair of IEEE Communication Society in Bangalore, he has been spearheading workshops on Emerging Technologies. He is involved with Dept of Science & Technology (DST) and premier institutes as member of Advisory Committee, Research Council and Governing Body. He is Fellow of IETE, IEI and Indian National Academy of Engineering (INAE).
Show all