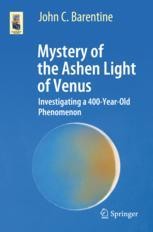 Mystery of the Ashen Light of Venus

The “Ashen Light” of Venus—a ghostly emission of light from the night side of our nearest planetary neighbor—is among the last unsolved mysteries of astronomical history. In the four centuries since the phenomenon was first reported, highly reputable visual observers of Venus have recorded seeing the Ashen Light, while others have spent a lifetime searching for it without once being convinced that they ever saw it.

Is the Ashen Light a trick of the eye? The result of a defective lens? A real scientific event?

Occasional references to the Ashen Light are scattered across the literature, yet no work to date has synthesized these records. This book therefore digs deep into the history of the mystery and our latest attempts to understand it, sifting through the clues that might explain whether it is caused by physics, is conjured up by the eye or brain, or a combination of both.

This baffling story will appeal to amateur astronomers, hobbyists, and lay readers interested in joining the debate about one of the most elusive observable phenomena ever recorded in the night sky.

John Barentine currently serves as the Director of Public Policy for the International Dark Sky Association (IDA) in Tucson, Arizona. He grew up in the Phoenix area and was involved in amateur astronomy there from early on. Later, he attended the University of Arizona, doing research at the National Optical Astronomy Observatories and National Solar Observatory headquarters in Tucson. From 2001-06 he was on the staff of Apache Point Observatory in New Mexico, serving first as an observing specialist on the Astrophysical Research Consortium 3.5-m telescope and then as an observer for the Sloan Digital Sky Survey.

John obtained a master’s degree in physics at Colorado State University and a master’s and doctorate in astronomy at the University of Texas at Austin. John has contributed to science in fields ranging from solar physics to galaxy evolution while helping develop hardware for ground-based and aircraft-borne astronomy. Throughout his career, he has been involved in education and outreach efforts to help increase the public understanding of science. In addition to his work for IDA, John is a member of the steering committee of the University of Utah Consortium for Dark Sky Studies and serves on light pollution committees of the American Astronomical Society and the International Astronomical Union. In 2018, he was elected a Fellow of the Royal Astronomical Society.

John is the author of two books on the history of astronomy for Springer: "The Lost Constellations" and "Uncharted Constellations." The asteroid (14505) Barentine is named in his honor. His interests outside of astronomy and dark skies include history, art/architecture, politics, law and current events.
Show all