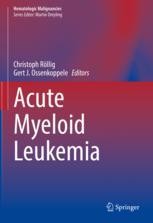 This book, written by a team of leading experts, provides a comprehensive overview of acute myeloid leukemia (AML), the most frequent acute leukemia in adults. The opening chapters present current knowledge of epidemiology, etiologic factors, and the pathogenesis and molecular development of AML. Detailed guidance is offered on laboratory and clinical diagnostic workup and disease classification, and the patient- and disease-related factors that determine prognosis and treatment allocation are identified. On the basis of these general considerations, initial treatments in patients considered fit for intensive treatment and in older and co-morbid patients are reviewed, and the available relapse treatment strategies, explained. For all clinical scenarios, the most recent data on the optimal use of newly approved agents in different AML subgroups are presented. Separate chapters address the treatment of acute promyelocytic leukemia, current practice of allogeneic stem cell transplantation, and special clinical situations. Finally, promising approaches in drug development, current standards and challenges in assessment of measurable residual disease, immune approaches, and ideas for innovative trial designs are considered.

Christoph Röllig, MD, is Professor of Medicine at the University of Dresden, Germany. Dr. Röllig received his medical training at the Free and Humboldt Universities of Berlin, Germany, and graduated in 1998. From 1999 to 2006, he undertook an internship in internal medicine and hematology and oncology at the University Hospital in Dresden, becoming a certified specialist for internal medicine in 2005 and for hematology and medical oncology in 2006. From 2006 to 2007, he did a Master’s degree in Public Health and Health Services Research at the London School of Hygiene and Tropical Medicine. He then worked in evidence-based medicine and guideline development at the Agency for Quality in Medicine in Berlin, Germany. Since 2009, Dr. Röllig has been a consultant hematologist and head of the hematological Clinical Trial Unit at the University Hospital in Dresden and has also led the central study office of the Study Alliance Leukemia (SAL) as SAL secretary. He acts as a reviewer for several hematological journals (New England Journal of Medicine, Blood, Lancet Oncology, Leukemia, Cancer, Bone Marrow Transplantation, Haematologica) and for the annual meetings of the European Haematology Association and American Society of Hematology. His main research interest are treatment optimization and real-world data in AML. He has acted as coordinating investigator in several phase II and III trials evaluating treatment optimization in AML and is the first and coordinating author of the AML guidelines of the German, Austrian and Swiss hematologic societies.  He is a member of Working Group for Clinical Trials at the German Society for Hematology and Oncology (DGHO) and member of the Scientific Working Group for AML at the European Haematology Association (EHA).

Gert Ossenkoppele was appointed as Professor of Hematology at the VU University Medical Center in Amsterdam, NL, in 2003. He obtained his doctorate in medicine at that same University in 1977. He is board certified in Hematology and Internal medicine(1984). The title of his PhD thesis (1990) was: ”Differentiation induction in AML”. Gert Ossenkoppele has authored over 430 publications in peer-reviewed journals and is invited speaker at many national and international scientific meetings. His research interests are mainly translational and include the (stem cell) biology of AML, leukemic stem cell target discovery, immunotherapy and measurable residual disease (MRD) detection using flow cytometry to inform treatment of AML. He is PI of national and international clinical trials in myeloid malignancies. He is reviewer on a regular basis for many high impact hematological journals (Blood, Leukemia, Haematologica, JAMA Oncology, Lancet Oncology  NEJM). He chairs the AML working party of HOVON (Dutch-Belgian Hematology Trial Group) and recently stepped down  as vice-chair of the HOVON Executive Board. He is a lead participant of the AML Work package of the European LeukemiaNet(ELN) as well as a board member of the ELN foundation. He leads the AML WP of HARMONY. He  rotated of as board member of the European Hematology Association and was very recently appointed as vice-chair of the EHA Educational Committee. He just rotated of as chair of the AML Scientific working group of EHA and is now a member of this group.. He is member of the Global and EU steering committee of the AMLGlobalPortal an educational portal for hematologists. (www.amlglobalportal.com). He chairs the institutional DSMB of his University. He now has because of his retirement an honorary position as hematologist at the Amsterdam University Medical Center.