Philosophy Epistemology & Philosophy of Science
Studies in Brain and Mind 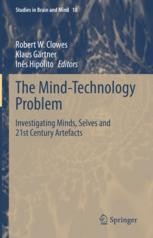 This edited book deepens the engagement between 21st century philosophy of mind and the emerging technologies which are transforming our environment. Many new technologies appear to have important implications for the human mind, the nature of our cognition, our sense of identity and even perhaps what we think human beings are. They prompt questions such as: Would an uploaded mind be 'me'? Does our reliance on smart phones, or wearable gadgets enhance or diminish the human mind? and: How does our deep reliance upon ambient artificial intelligence change the shape of the human mind?

Readers will discover the best philosophical analysis of what current and near future 21st technology means for the metaphysics of mind. Important questions are addressed on matters relating to the extended mind and the distributed self. Expert authors explore the role that the ubiquitous smart phone might have in creating new forms of self-knowledge. They consider machine consciousness, brain enhancement and smart ambient technology, and what they can tell us about phenomenal consciousness.

While ideas of artificial general intelligence, cognitive enhancements and the smart environment are widely commented on, serious analysis of their philosophical implications is only getting started. These contributions from top scholars are therefore very timely, and are of particular relevance to students and scholars of the philosophy of mind, philosophy of technology, computer science and psychology.
Show all
About the authors

Robert W. Clowes is Senior Researcher and Coordinator of the Lisbon Mind and Reasoning Group at the Universidade Nova de Lisboa, Portugal. His research interests span a range of topics in philosophy and cognitive science, including the philosophy of technology, memory, agency, skills, and the implications of embodiment and cognitive extension for our understanding of the mind and conscious experience. He is particularly interested in the philosophical and cognitive scientific significance of new technologies, especially those involving the Internet and Artificial Intelligence and how these interact with human agency. His work has appeared in a variety of journals, including TOPOI, Review of Philosophy and Psychology, AI & Society, Phenomenology and the Cognitive Sciences, Philosophy and Technology, and the Journal of Consciousness Studies. He received his Ph.D at the University of Sussex.

Inês Hipólito is a Postdoctoral fellow and a lecturer at the Berlin School of Mind and Brain (Humboldt-Universität zu Berlin), and an affiliated member to the Neurobiology group at the Wellcome centre for Human Neuroimaging (University College London). She works on the intersection between philosophy of cognition and computational neuroscience. More precisely, Hipólito applies tools of conceptual modelling to answer philosophical questions of cognition that are compatible with the formalisms of dynamical systems theory. Hipólito has co-edited special issues for Philosophical Transactions, Consciousness and Cognition, and the Mind and Brain Studies (Springer). She has published work in edited books (Routledge, CUP) and journals (Australasian Philosophical Review, Physics of Life Reviews, Progress in Biophysics and Molecular Biology, Synthese, Network Neuroscience). Hipólito’s work has been honoured with international prizes and awards, including the Portuguese Ministry for Science and Higher Education; the University of Oxford; the Federation of European Neuroscience Societies; and an award by the British Association for Cognitive Neuroscience.