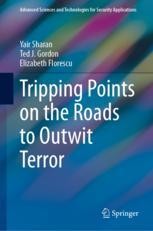 Tripping Points on the Roads to Outwit Terror

This book assesses potential developments of terrorism and ways to prevent it—the growing threats as new technologies become available — and how the same new technologies may help trap those with potential mal-intent. The drumbeat of terror resonates from everywhere; how can we stop it? What are the tripping points along the road and how can we avoid them?

This book also looks at the unexpected and often random success and failure of policies to counter the evolving terror threat. The various aspects of the terrorism phenomena are presented in a unique way using scenario vignettes, which give the reader a realistic perception of the threat. The combination of positive and negative implications of emerging technologies is describing what might well be one of the most important dimensions of our common future.

Yair Sharan, Director, FIRS2T Group, Israel. Dr. Yair Sharan is currently Director of FIRS2T (Foresight Insight Research Security Society and Technology) Group in Israel, active in the security and technology field. He was Director of the Interdisciplinary Center for Technological Analysis and Forecasting (ICTAF) at Tel Aviv University. He is Co-Director of the Israeli Node of The Millennium Project (MP) and Member of the MP planning committee. He earned his B.Sc. and M.Sc. in Mathematics and Physics at the University of Jerusalem. He earned his Ph.D. in Physics from the Weizmann Institute of Science. Fields of interest are research and science foresight and policy, security issues, the impact of technology on national strategy and technology assessment. He coordinated and participated in several EU projects including FESTOS in the security program, and PRACTIS in Science in Society. He has been Co-Director of several NATO Workshops and is Co-Author of several books including Terrorism and the Internet, Lone Actors – an Emerging Security Threat, Identification of Potential Terrorists and Adversary Planning, and Medical Response to Terror Threats.

Theodore J. Gordon is Senior Futurist and Co-Founder of The Millennium Project, Futurist and Management Consultant, and Specialist in forecasting methodology, planning, and policy analysis. He is Co-Founder and Board Member of The Millennium Project, a global think tank. He formed the consulting firm, The Futures Group in 1971, and led it for 20 years. Prior to forming The Futures Group, he was one of the founders of The Institute for the Future and before that consulted for the math and policy department at RAND Corporation. He was also Chief Engineer of the McDonnell Douglas Saturn S-IV space vehicle and was in charge of the launch of early ballistic missiles and space vehicles from Cape Canaveral. He is Author and Co-Author of many publications, including the book (with Yair Sharan and Elizabeth Florescu) “Lone Wolf Terrorism Prospects and Potential Strategies to Address the Threat.”

Elizabeta Florescu is Director of Research and Board Member of The Millennium Project, and Foresight Consultant. She is Co-Author of several publications, including the “State of the Future” annual reports, the book “Lone Wolf Terrorism Prospects and Potential Strategies to Address the Threat,” the report “Environmental Crimes, Military Actions, and the International Criminal Court”, and many articles. She has been one of the principal investigators working on the monthly reports for the US Army Environmental Policy Institute, assessing worldwide environment and new technologies-related issues with potential implications for the military. She has a vast international experience, having lived and worked in several countries.