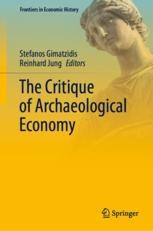 The Critique of Archaeological Economy

This book studies past economics from anthropological, archaeological, historical and sociological perspectives. By analyzing archeological and other evidence, it examines economic behavior and institutions in ancient societies. Adopting an interdisciplinary perspective, it critically discusses dominant economic models that have influenced the study of past economic relations in various disciplines, while at the same time highlighting alternative theoretical trajectories. In this regard, the book’s goal is not only to test theoretical models under scrutiny, but also to present evidence against the rationalization of past economic behavior according to the rules of modern markets. The contributing authors cover various topics, such as trade in the classical Greek world, concepts of commodity and value, and management of economic affluence.

Stefanos Gimatzidis received his B.A. and M.A. degrees in Classical Archaeology from the Aristotle University Thessaloniki, Greece, and his Ph.D. from the Institute for Prehistoric Archaeology of the Freie Universität Berlin, Germany, in 2007. He specializes in the Early Iron Age archaeology of the Mediterranean, Archaic and Classical periods with a focus on the Aegean, Balkans and the Levant. From 2005 to 2011, he was employed at the Ministry of Culture of Greece. Starting in 2011, he has led various international research projects as senior researcher at the Austrian Academy of Sciences in Vienna and worked extensively in Greece, the central Balkans, Italy, Turkey and Lebanon. In 2015, he began lecturing at the University of Vienna’s Institute for Classical Archaeology, and since December 2017, he has been employed as project director at the Austrian Archaeological Institute.

Reinhard Jung is an archaeologist and a specialist for the Bronze and Early Iron Age in southern Europe and the Near East. He received his Ph.D. degree from the Institute for Prehistoric Archaeology of the Freie Universität Berlin, Germany, in 1999, and his postdoctoral degree (venia legendi) in pre- and protohistory from the University of Tübingen, Germany, in 2013. From 2002 to 2013, he directed research projects at the Austrian Academy of Sciences, the DAI Athens, Greece, and the University of Salzburg, Austria. From 2013 to 2015, he co-directed excavations at the Bronze Age settlement site of Punta di Zambrone in Calabria, Italy. Since 2013, he has been a senior researcher at the Austrian Academy of Sciences’ Institute for Oriental and European Archaeology, and since 2015 he is head of the research group “Mediterranean Economies.” In addition, he teaches at the University of Tübingen, Germany.