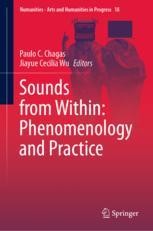 Sounds from Within: Phenomenology and Practice

This book transforms phenomenology, music, technology, and the cultural arts from within. Gathering contributions by performing artists, media technology designers, nomadic composers, and distinguished musicological scholars, it explores a rich array of concepts such as embodiment, art and technology, mindfulness meditation, time and space in music, self and emptiness, as well as cultural heritage preservation. It does so via close studies on music phenomenology theory, works involving experimental music and technology, and related cultural and historical issues.

This book will be of considerable interest to readers from the fields of sound studies, science and technology studies, phenomenology, cultural studies, media studies, and sound art theory. This book is equally relevant and insightful for musicians, composers, media artists, sound artists, technology designers, and curators and arts administrators from the performing and visual arts.

Paulo C. Chagas is Professor of Composition at the University of California, Riverside. A very versatile composer, Chagas has written over 180 works for orchestra, chamber music, electroacoustic music, audiovisual and multimedia compositions. His music unfolds a pluralistic aesthetic, using the most diverse musical materials from different cultures, acoustic and digital media, dance, video, and audiovisual installations. His works have resulted from numerous commissions and have been performed in US, Europe, Russia, Asia and Brazil to public and critical acclaim. Chagas’ scholarship is focused on musical semiotics, philosophy, electroacoustic and digital music. His book Unsayable Music (Leuven University Press, 2014) presents theoretical, critical and analytical reflections on key topics of contemporary music. Chagas received numerous prizes for his work including recently a Fulbright Scholar award.
Jiayue Cecilia Wu: Originally from Beijing, Jiayue Cecilia Wu is a scholar, composer, multimedia artist, and audio engineer. Cecilia earned her Bachelor of Science degree in Design and Engineering in 2000 and subsequently worked as a professional music producer, audio engineer, composer, and vocalist for EMI Records, Universal Music, Taihe Rye Music, and Shazam Entertainment for the next ten years. In 2010, Cecilia produced her original album of spiritual electronic music, Clean Your Heart. In 2013, she completed her Master’s degree at the Center for Computer Research in Music and Acoustics (CCRMA) at Stanford University. In 2018, Cecilia obtained her Ph.D. in Media Arts and Technology from the University of California Santa Barbara, where she studied electronic music composition and media technology with Dr. Curtis Roads. As an audio engineer, she received a 2-year grant award from the Audio Engineering Society. As a musician, she received an award from the California State Assembly for being a positive role model in sharing Chinese culture. As a multimedia artist, she received the Young Alumni Arts Project Grant Award from Stanford University. As a scholar, she has been awarded a multi-year UC Central Campus Fellowship and a National Academy of Sciences Sackler Fellowship. Currently, Cecilia is an Assistant Professor at the University of Colorado Denver’s College of Arts and Media.