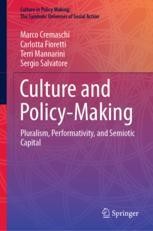 This book advances the understanding and modelling of sensemaking and cultural processes as being crucial to the scientific study of contemporary complex societies. It outlines a dynamic, processual conception of culture and a general view of the role of cultural dynamics in policy-making, drawing three significant methodological implications: pluralism, performativity, and semiotic capital. It focuses on the theoretical and methodological aspects of the analysis of culture and its dynamics that could be applied to the developing of policymaking and, in general, to the understanding of social phenomena. It draws from the experience and data of a large-scale project, RECRIRE, funded by the H2020 program that mapped the symbolic universes across Europe after the economic crisis. It further develops the relationship between culture and policy-making discussed in two previous volumes in this series, and constitutes the ideal third and final element of this trilogy. The book is a useful tool for academics involved in studying cultural dynamics and for policy-oriented researchers and decision-makers attentive to the cultural dimensions of the design, implementation and reception of public policies.

Marco Cremaschi. Full professor of Urban Planning and Design at the Urban School, SciencesPo, Paris, and a fellow of the Institut Convergence Migration, Paris. His research insists on a comparative approach to large urban projects in cities, with special focus on Rome, Buenos Aires and Kolkata, and to the reception of refugees in European metropolitan areas.

Sergio Salvatore. Professor of Dynamic Psychology at the Department of Dynamic and Clinical Psychology, and Health Studies, La Sapienza University of Rome. His scientific interests regard the psychodynamic and semiotic theorization of psychological and social phenomena and the methodology of analysis of sociocultural and mental processes as field dynamics. He also takes an interest in the theory and the analysis of psychological intervention in socio-political, community, scholastic, organizational as well as clinical fields. On these issues he has designed and managed various scientific projects and published about 300 works among volumes, chapters, and articles.

Carlotta Fioretti. Researcher at the Territorial Development Unit of the Joint Research Centre (JRC) of the European Commission in Seville, Spain. She holds a PhD in urban and territorial policies obtained at University of Roma Tre, where she worked as post-doctoral researcher and adjunct professor. Her research interests concern urban regeneration, the inclusion of international migrants in urban areas, strategic urban development and the EU cohesion policy.