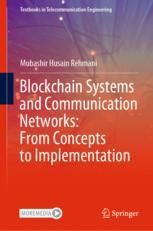 Blockchain Systems and Communication Networks: From Concepts to Implementation

This book provides extensive insights on blockchain systems, starting from a historical perspective and moving towards building foundational knowledge, with focus on communication networks. It covers blockchain applications, algorithms, architectures, design and implementation, and security and privacy issues, providing the reader with a comprehensive overview. Further, it discusses blockchain systems and its integration to communication networks. The book includes hands-on, practical tutorials, self-assessment exercises, and review questions; tips and sample programs are also provided throughout. Complementary supporting material for instructors, including open source programming code for practical tutorials and exercises, is also available. The target audience includes graduate students, professionals, and researchers working in the areas of blockchain systems, distributed ledger technology, computer networks and communications, artificial intelligence, and cybersecurity.

Mubashir Husain Rehmani received his Ph.D. from the University Pierre and Marie Curie, France, in 2011, and is currently working as an Assistant Lecturer at Munster Technological University (MTU), Ireland. He was previously affiliated with the University of Paris-Est, France, COMSTATS University, Pakistan, and Waterford Institute of Technology, Ireland. He is currently an Area Editor of IEEE COMMUNICATIONS SURVEYS AND TUTORIALS and the Associate Editor of IEEE Transactions on Green Communication and Networking, IEEE Access Journal, Elsevier Future Generation Computer Systems journal, Elsevier Computers and Electrical Engineering (CAEE) Journal, Elsevier Journal of Network and Computer Applications (JNCA), Springer Wireless Networks Journal, and the Journal of Communications and Networks (JCN). He is also serving as Column Editor (Book Reviews) for IEEE COMMUNICATIONS MAGAZINE.

A senior member of both the IEEE and IEEE Communications Society, Dr. Rehmani is an Author/Editor of several books published by prestigious publishers such as John Wiley, Springer, CRC Press - Taylor and Francis Group, USA, and IGI Global USA. He has published over 110 journal papers, 14 book chapters, and more than 10 international conference papers. He received the “Best Researcher of the Year 2015 of COMSATS Wah” award in 2015. He received the certificate of appreciation, “Exemplary Editor of the IEEE Communications Surveys and Tutorials for the year 2015” from the IEEE Communications Society. He received Best Paper Award from IEEE ComSoc Technical Committee on Communications Systems Integration and Modeling (CSIM), in IEEE ICC 2017. He consecutively received research productivity award in 2016-17 and also ranked # 1 in all Engineering disciplines from Pakistan Council for Science and Technology (PCST), Government of Pakistan. He received the Best Paper Award in 2017 from Higher Education Commission (HEC), Government of Pakistan. He is the recipient of Best Paper Award in 2018 from Elsevier Journal of Network and Computer Applications. He has been selected for inclusion on the annual Highly Cited Researchers™ 2020 list from Clarivate. His performance in this context features in the top 1% in the field of Computer Science.