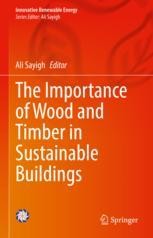 The Importance of Wood and Timber in Sustainable Buildings

This book emphasizes the important message that architects and structural engineers must strive to ensure that the buildings they design and construct should not be major contributors to climate change. Rather, they should be exploring the use of green materials and building methods – such as timber, wood, and associated materials – in order to safeguard the environment. These sustainable materials are not only environmentally friendly, but they have the added benefit of being easy to manufacture, cost effective, often locally available, and easily replenished. Moreover, it has been demonstrated that wood and timber are viable materials in the construction of a wide variety of building types, including medium and high-rise buildings.
The Importance of Wood and Timber in Sustainable Buildings brings together a distinguished group of contributors from different cultures and building traditions to address why now is the time to rethink our construction methods and explore replacing many of the carbon intensive materials that are currently being used with wood and timber.

Dr. Ali Sayigh is a UK Citizen, Graduated from London University, & Imperial College, BSC.AWP, DIC, PhD, in 1966. He is Fellow of the Institute of Energy, and Fellow of the Institution of Engineering & Technology, Chartered Engineer, Chairman of Iraq Energy Institute, and Fellow of the Royal Society of Arts.
Prof Sayigh taught in Iraq, Saudi Arabia, Kuwait, Reading University and University of Hertfordshire From 1966 – 2004. He was Head of Energy Department at Kuwait Institute for Scientific Research (KISR) and Expert in renewable energy at AOPEC, Kuwait from 1981-1985.

He started working in solar energy in September 1969. In 1972, he established with some colleagues in Saudi Arabia “The Journal of

Engineering Sciences” in Riyadh, Saudi Arabia and in 1984 he established International Journal for Solar and Wind Technology, as an Editor-in-Chief. This has changed its name in 1990 to Journal of Renewable Energy. He is editor of several International journal published in Morocco, Iran, Bangladesh, Nigeria and India. He established WREN and the World Renewable Energy Congress in 1990. Member of various societies related to climate change and renewable energy. He is Chairman of Iraq Energy Institute since 2010.

He was consultants to many national and international organizations, among them, the British Council, ISESCO, UNESCO, UNDP, ESCWA, UNIDO and UN. He run conferences and Seminars in 54 different countries, published more than 600 papers. He edited, written and associated in more than 100 books. He supervised more than 82 MSc. and 36 PhD students. He is editor-in- chief of the yearly Renewable Energy Magazine, 2000-2016. He is the founder of WREN and Renewable Energy Journal published by Elsevier & was the Editor-in-chief for 30 years from 1984 – 2014.

He is the Editor-in-chief of Comprehensive Renewable Energy coordinating 154 top scientists, Engineers and researchers’ contribution in eight volumes published in 2012 by Elsevier which won 2013 PROSE award in USA. He is the founder of Med Green Buildings and Renewable Energy Forum since 2011. In 2016 he established peer review international open access journal called “Renewable Energy and Environmental Sustainability” – REES, which is published in English on line by EDP publisher in Paris.

Winner of the Best Clean Energy Implementation Support NPO – UK. In 2018 WREN was rated globally is one of the best organization in the UK promoting renewable energy. In November 2018, Prof. Sayigh was elected fellow of the Royal Society of Art, (FRSA). Prof Sayigh is working with Springer Nature in publishing books and proceedings since 2014 and up to now.