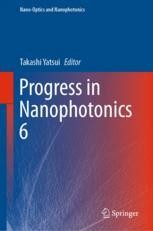 This book focuses on recent interconnected topics in nanophotonics written by scientists at the forefront of these fields. The book presents results of numerical investigations of light-matter interactions at the nanoscale and in the attosecond regime using first-principles calculations while also discussing recent experimental developments of higher-order harmonic generation for the field of attosecond science. In addition to this, the book reviews recent advances in select topical areas such as highly efficiency solid-state light sources based on nanophotonics, plasmonic photochemical water splitting for efficient energy harvesting, and optical spectroscopy of single-walled carbon nanotubes with quite rich physics for future application in photonics.

Takashi Yatsui received his B.E. degree from Keio University, Tokyo, Japan in 1995 and M.E. and D.E. degrees from Tokyo Institute of Technology, Tokyo, Japan in 1997 and 2000, respectively. From 1999 to 2000, he was a research fellow of the Japan Society for the Promotion of Science. From 2000 to 2008, he was a researcher at the Japan Science and Technology Agency, Tokyo. From 2008 to 2020, he was Associate Professor in the University of Tokyo. In 2020, he joined Toyohashi University of Technology as Professor. His current research interests include nanophotonic chemical reactions using optical near-field and its application to nanophotonics. Dr. Yatsui is recipient of the following