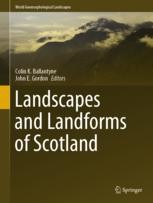 Landscapes and Landforms of Scotland

This book provides an appealing and informative overview of the outstanding landforms and landscapes of Scotland. Scotland is internationally renowned for the diversity of its geology, landforms and landscapes. The rock record spans most of geological time, from the Archaean to the Palaeogene, and represents the outcome of tectonic plate movements, associated geological processes, and sea-level and climate changes. Scotland incorporates primeval gneiss landscapes, the deeply eroded roots of the Caledonian mountain chain, landscapes of extensional tectonics and rifting, and eroded remnants of volcanic complexes that were active when the North Atlantic Ocean opened during the Palaeogene. The present relief reflects uplift and deep weathering during the Cenozoic, strongly modified during successive episodes of Pleistocene glaciation.  This striking geodiversity is captured in this book through 29 chapters devoted to the evolution of Scotland’s scenery and locations of outstanding geomorphological significance, including ancient palaeosurfaces, landscapes of glacial erosion and deposition, evidence of postglacial landscape modification by landslides, rivers and wind, and coastal geomorphology. Dedicated chapters focus on Ice Age Scotland and the associated landscapes, which range from alpine-type mountains and areas of selective glacial erosion to ice-moulded and drift-covered lowlands, and incorporate accounts of internationally renowned sites such as the ‘Parallel Roads’ of Glen Roy, the Cairngorm Mountains and the inselbergs of Assynt. Other chapters consider the record of postglacial rock-slope failures, such as the famous landslides of Trotternish on Skye, and the record of fluvial changes since deglaciation. The sea-level history of Scotland is addressed in terms of its raised and submerged shorelines, while several chapters discuss the contrasting coastal landscapes, which range from the spectacular sea cliffs of Shetland and Orkney to the beaches and dunes of eastern Scotland. The role of geoconservation in preserving Scotland’s outstanding geomorphological heritage is outlined in the final chapter.  The book offers an up-to-date and richly illustrated reference guide for geomorphologists, other Earth scientists, geographers, conservationists, and all those interested in geology, physical geography, geomorphology, geotourism, geoheritage and environmental protection.

Colin K. Ballantyne is Emeritus Professor of Physical Geography at the University of St Andrews and a Fellow of the Royal Society of Edinburgh, the Royal Scottish Geographical Society, the Geological Society and the British Society for Geomorphology. He has published over 200 papers on various aspects of geomorphology and Quaternary science, many of which concern Scotland. His recent books include The Quaternary of Skye (2016), Periglacial Geomorphology (2018) and Scotland’s Mountain Landscapes: a Geomorphological Perspective (2019). He is an Honorary Life Member of the Quaternary Research Association and a recipient of the Clough Medal of the Edinburgh Geological Society, the Saltire Earth Science Medal, the Gordon Warwick Medal and Wiley Award of the British Society for Geomorphology, the President’s Medal, Coppock Research Medal and Newbigin Prize of the Royal Scottish Geographical Society, and the Lyell Medal of the Geological Society.  John E. Gordon is an Honorary Professor in the School of Geography and Sustainable Development at the University of St Andrews, Scotland. His research interests include geoconservation, the Quaternary of Scotland, and mountain geomorphology and glaciation in North Norway and South Georgia. He has published many academic papers and popular articles in these fields, and is co-author/co-editor of books including Quaternary of Scotland (1993), Antarctic Environments and Resources (1998), Earth Science and the Natural Heritage (2001), Land of Mountain and Flood: the Geology and Landforms of Scotland (2007) and Advances in Scottish Quaternary Studies, a special issue of Earth and Environmental Science Transactions of the Royal Society of Edinburgh (2019). He is a Fellow of the Royal Scottish Geographical Society, an Honorary Member of the Quaternary Research Association and a Deputy Chair of the Geoheritage Specialist Group of the IUCN World Commission on Protected Areas.