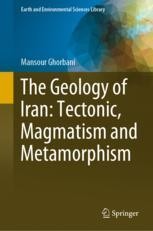 The Geology of Iran: Tectonic, Magmatism and Metamorphism

This book describes the geological setting of Iran throughout geological history, referring to paleogeography and general geodynamics. Also, all structural units, faults, tectonic phases and orogeny occurred in the geology of Iran have been evaluated. Magmatic and metamorphic rocks along with ophiolitic complexes have extensive outcrops in Iran, and these rocks with Precambrian age constitute its basement. Study and identification of such rocks not only throws light on the geodynamic issues of Iran but also helps in recognition of the mode of formation and evolution of the sedimentary basins located within various structural divisions of the country. Moreover, the majority of metallic and non-metallic mineral deposits are associated either directly or indirectly with magmatic, and at time metamorphic, rocks. In the Magmatism and Metamorphism parts, it is tried to thoroughly consider the various aspects of the igneous rocks, whether intrusive, extrusive or young volcanoes, from the point of view of petrography, geochemistry and geodynamics. In addition, the major intrusive bodies of Iran have been presented along with their petrologic and chronologic specifications in tables, mentioning the bibliographic resources.

Dr. Mansour Ghorbani was born in Nanaj village, a rural district of Malayer County in the west of Iran in 1961. He completed his primary and secondary educations in his hometown by 1979.

Following his academic accomplishments, he joined the geology faculty at the Shahid Beheshti University and has been teaching undergraduates, postgraduates and Ph.D. students till now. He currently holds the associate professor position at the University.

From 1991 to 1996, he was involved in the treatise on the geology at geological survey of Iran. He wrote and compiled a lot of literatures on the geology and mineral deposits, such as economic deposits, soils, iron, antimony, arsenic, mercury, copper, lead and zinc in Iran.

Aside from teaching, he has been working on international and national research projects with mining, oil and gas companies.

The rewards and outcome of these years of studying and working are 39 books, more than 200 academic papers, supervising 7 research projects, advising and supervising of 75 theses in M.Sc. and Ph.D. degrees, over 120 scientific and technical reports in reference to natural and mineral resources in Iran and Iranology, as well as the compilation of international metallogeny and gem distribution maps of the Middle East.


He enjoys travelling around the country and abroad; he maintains that while visiting and working in various regions, he meets different ethnic groups with different cultures and traditions in Iran. He has learned how the habitat and the natural surroundings have a greater effect on the people’s socio-economic aspects of life in some places than others. So, he wrote a comprehensive atlas of Iran, from tourism, ecotourism and geotourism point of view in 10 volumes in Persian.

Years of working experiences and personal beliefs in private research work compelled him to establish his own research centre called Pars Geological Research Centre (Arianzamin) in 2002.

He, from a sociocultural standpoint, endeavours to help countries and people who speak the same language and have had the same or similar cultures, to establish a long-lasting sociocultural bond with one another.