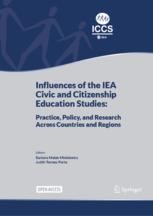 Influences of the IEA Civic and Citizenship Education Studies

This open access book identifies the multiple ways that IEA’s studies of civic and citizenship education have contributed to national and international educational discourse, research, policymaking, and practice. The IEA International Civic and Citizenship Education Study (ICCS), first conducted in 2009, was followed by a second cycle in 2016. The project was linked to the earlier IEA Civic Education Study (CIVED 1999, 2000). IEA’s ICCS remains the only large-scale international study dedicated to formal and informal civic and citizenship education in school.  It continues to make substantial contributions to understanding the nature of the acquired civic knowledge, attitudes, and participatory skills. It also discusses in-depth how a wide range of countries prepare their young people for citizenship in changing political, social, and economic circumstances.  The next cycle of ICCS is planned for 2022.

In this book, more than 20 national representatives and international scholars from Europe, Latin America, Asia, and North America assess how the processes and findings of the 2009 and 2016 cycles of ICCS and CIVED 1999/2000 have been used to improve nations’ understanding of their students’ civic knowledge, beliefs, attitudes, current civic-related behaviors, and intentions for future participation in a comparative context.  There are also chapters summarizing the secondary analysis of those studies’ results indicating their usefulness for educational improvement and reflecting on policy issues.

The analyses and reflections in this book provide timely insight into international educational discourse, policy, practice, and research in an area of education that is becoming increasingly important for many societies.

Dr Barbara Malak-Minkiewicz is an honorary member of IEA, managed IEA’s membership relations from 1996 to 2013, and was a member of advisory committees for IEA CIVED and ICCS. She gained her PhD from the University of Warsaw, where she taught social and developmental psychology and conducted research on socialization as well as interpersonal and intergroup conflict. During her career, she has provided consultancy on educational reform for Poland  and other former communist countries.
Dr Judith Torney-Purta was a professor of human development in the College of Education at the University of Maryland, College Park from 1981 until her retirement in 2014. Previously, she was a professor of psychology at the University of Illinois, Chicago from 1970 to 1981. She led the civic education part of IEA’s Six Subject Survey, chaired the steering committee for IEA CIVED, and is a member of the advisory committee for ICCS. Dr Torney-Purta authored numerous publications in the field, received a range if awards and honors, and was elected as a Member of the US National Academy of Education in 2014.