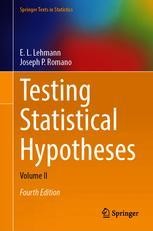 Testing Statistical Hypotheses, 4th Edition updates and expands upon the classic graduate text, now a two-volume set. The first volume covers finite-sample theory, while the second volume discusses large-sample theory. A definitive resource for graduate students and researchers alike, this work grows to include new topics of current relevance. New additions include an expanded treatment of multiple hypothesis testing, a new section on extensions of the Central Limit Theorem, coverage of high-dimensional testing, expanded discussions of permutation and randomization tests, coverage of testing moment inequalities, and many new problems throughout the text.

E.L. Lehmann (1917 – 2009) was an American statistician and professor of statistics at the University of California, Berkeley. He made significant contributions to nonparametric hypothesis testing, and he is one of the eponyms of the Lehmann-Scheffé theorem and of the Hodges-Lehmann estimator. Dr. Lehmann was a member of the National Academy of Sciences and the American Academy of Arts and Sciences, and the recipient of honorary degrees from the University of Leiden, The Netherlands and the University of Chicago. He was the author of Elements of Large-Sample Theory (Springer 1999) and Theory of Point Estimation, Second Edition (Springer 1998, with George Casella).

Joseph P. Romano has been on faculty in the Statistics Department at Stanford since 1986. Since 2007, he has held a joint professorship appointment in both Statistics and Economics. He is a coauthor of three books, as well as over 100 journal articles. Dr. Romano was named NOGLSTP's 2021 LGBTQ+ Scientist of the Year, has been a recipient of the Presidential Young Investigator Award and many other grants from the National Science Foundation, and is a Fellow of the Institute of Mathematical Statistics and of the International Association of Applied Econometrics. His research has focused on such topics as: bootstrap and resampling methods, subsampling, randomization methods, inference, optimality, large-sample theory, nonparametrics, multiple hypothesis testing, and econometrics. He has invented or co-invented a variety of new statistical methods, including subsampling and the stationary bootstrap, as well as methods for multiple hypothesis testing. These methods have been applied to such diverse fields as clinical trials, climate change, finance, and economics.