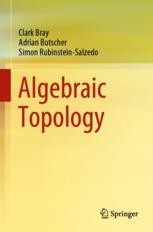 Algebraic Topology is an introductory textbook based on a class for advanced high-school students at the Stanford University Mathematics Camp (SUMaC) that the authors have taught for many years. Each chapter, or lecture, corresponds to one day of class at SUMaC. The book begins with the preliminaries needed for the formal definition of a surface. Other topics covered in the book include the classification of surfaces, group theory, the fundamental group, and homology.

This book assumes no background in abstract algebra or real analysis, and the material from those subjects is presented as needed in the text. This makes the book readable to undergraduates or high-school students who do not have the background typically assumed in an algebraic topology book or class. The book contains many examples and exercises, allowing it to be used for both self-study and for an introductory undergraduate topology course.

Adrian Butscher received his B.Sc. in mathematics and physics at the University of Toronto and his Ph.D. in mathematics at Stanford University.  After a fifteen-year period in academia, conducting research in pure and applied differential geometry and teaching at all levels of the undergraduate and graduate curricula, Adrian now works as a research scientist with Autodesk, Inc., a global software company that creates digital design tools for the manufacturing, architecture, building, construction, media, and entertainment industries.  While at Stanford, Adrian served as a counsellor and instructor for SuMAC, the Stanford University Mathematics Camp, a month-long, immersive educational experience for mathematically gifted high school students.
Simon Rubinstein-Salzedo received his PhD in mathematics from Stanford University in 2012. Afterwards, he taught at Dartmouth College and Stanford University. In 2015, he founded Euler Circle, a mathematics institute in the San Francisco Bay Area, dedicated to teaching college-level mathematics classes to advanced high-school students, as well as mentoring them on mathematics research. His research interests include number theory, algebraic geometry, combinatorics, probability, and game theory.