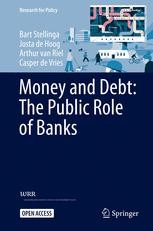 Money and Debt: The Public Role of Banks

This Open Access book from the Netherlands Scientific Council for Government Policy explains how money creation and banking works, describes the main problems of the current monetary and financial system and discusses several reform options. This book systematically evaluates proposals for fundamental monetary reform, including ideas to separate money and credit by breaking up banks, introducing a central bank digital currency, and introducing public payment banks. By drawing on these plans, the authors suggest several concrete reforms to the current banking system with the aim to ensure that the monetary system remains stable, contributes to the Dutch economy, fairly distributes benefits, costs and risks, and enjoys public legitimacy. This systematic approach, and the accessible way in which the book is written, allows specialized and non-specialised readers to understand the intricacies of money, banking, monetary reform and financial innovation, far beyond the Dutch context.

Bart Stellinga is a senior research fellow at the Netherlands Scientific Council for Government Policy (WRR). He studied political science (MSc) and philosophy (MA) at the University of Amsterdam (UvA). He obtained his doctorate at the UvA in 2018 for his thesis ‘The financial valuation crisis’, addressing the politics of post-crisis financial reform in the European Union. At the WRR Bart has contributed to publications on the privatization of public sector activities, food policy, financial supervision, and monetary policy and financial regulation. He is also a research associate at the Political Economy and Transnational Governance (PETGOV) programme group at the UvA.

Josta de Hoog is a senior research fellow at the WRR. She studied Public Administration (MSc) and Law (LLM) at the Erasmus University Rotterdam. Before starting at the WRR, Josta worked as a consultant for McKinsey & Company. She also held a position as researcher and lecturer at the Netherlands School of Public Administration (NSOB) and she was a board member of the National ThinkTank Foundation. Her work at the WRR has focused on a variety of topics, including citizen participation in politics, food policy, monetary policy and financial regulation, and health care.

Arthur van Riel is a senior research fellow at the WRR. He studied Economic History and Economics at Leiden University and Freie Universität Berlin. He obtained his doctorate from Utrecht University in 2018 for his thesis ‘Trials of Convergence. Prices, Markets and Industrialization in the Netherlands, 1800-1913'. He has held posts at VU University Amsterdam, Utrecht University, the Netherlands Economic Institute (Ecorys), the Ministry of the Interior and Kingdom Relations and the Ministry of Finance. He has published on a range of topics, including the European Monetary Union, elections and the economy during the Weimar Republic, Dutch economic history in the early modern period and government and industrialization in the 19th century.

Casper de Vries holds the Witteveen chair of Monetary Economics at the Erasmus School of Economics, Erasmus University Rotterdam. Casper is a fellow of the Tinbergen Institute and serves as a member of the Scientific Council for the Dutch Government (WRR); he is also an advisor to two Dutch pension funds. Casper received his graduate training at Purdue University, after which he held positions at Texas A&M University and KU Leuven. He has been a visiting scholar at several European and American research institutes and central banks. Most recently at Chapman University. He has served as vice dean of research and education at the Erasmus School of Economics and as a crown member to the Dutch socio-economic Council (SER). Casper’s research interests focus on international monetary issues, like foreign exchange rate determination and exchange rate risk, the issues surrounding the Euro, financial markets risk, risk management and systemic risk, and last but not least, applied game theory.