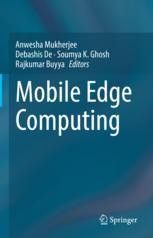 Mobile Edge Computing (MEC) provides cloud-like subscription-oriented services at the edge of mobile network. For low latency and high bandwidth services, edge computing assisted IoT (Internet of Things) has become the pillar for the development of smart environments and their applications such as smart home, smart health, smart traffic management, smart agriculture, and smart city. This book covers the fundamental concept of the MEC and its real-time applications. The book content is organized into three parts: Part A covers the architecture and working model of MEC, Part B focuses on the systems, platforms, services and issues of MEC, and Part C emphases on various applications of MEC.
This book is targeted for graduate students, researchers, developers, and service providers interested in learning about the state-of-the-art in MEC technologies, innovative applications, and future research directions.

Anwesha Mukherjee has received B. Tech in Information Technology from Kalyani Govt. Engineering College in 2009. She has received M. Tech in Information Technology from West Bengal University of Technology in 2011. She stood first class first in M. Tech and received Inspire Fellowship from the Department of Science & Technology, Govt. of India to pursue her Ph.D. She has received Ph.D. in Computer Science and Engineering from West Bengal University of Technology in 2018. She has worked as a Research Associate in the computer science department of IIT Kharagpur. She is currently working as an Assistant Professor and Head of the Department of Computer Science, Mahishadal Raj College, West Bengal, India. Her research areas include IoT, Fog computing, mobile network, Geospatial informatics and mobile cloud computing. She has received the Young Scientist Award from the International Union of Radio Science in 2014 at Beijing, China. She has published thirty six peer-reviewed articles in International journals including IEEE, IET, Elsevier, Springer, Wiley and ASP, ten International conference papers, and two book chapters.
Debashis De is Professor Department of Computer Science and Engineering and Director of School of Computational Science of the West Bengal University of Technology, India, and Adjunct research fellow at the University of Western Australia, Australia. He was awarded the prestigious Boyscast Fellowship by the Department of Science and Technology, Government of India, to work at the Herriot-Watt University, Scotland, UK. He received the Endeavour Fellowship Award from 2008–2009 by DEST Australia to work at the University of Western Australia. He received the Young Scientist award both in 2005 at New Delhi and in 2011 at Istanbul, Turkey, from the International Union of Radio Science, Belgium. In 2016 he received JC bose research award by IETE, New Delhi. In 2019 he received Siksha Ranta Award by the Govt. of West Bengal.  His research interests include mobile edge computing and IoT. He published in more than 300 peer-reviewed journals and 100 conference papers. He published eight research monographs in CRC, Springer, NOVA, Elsevier and five textbooks in Pearson.
Soumya K. Ghosh received the M.Tech. and Ph.D. degrees from the Department of Computer Science and Engineering, IIT Kharagpur, India, in 1996 and 2002, respectively. He was with the Indian Space Research Organization, Bengaluru, India. He is currently a Professor with the Department of Computer Science and Engineering, IIT Kharagpur. He is also head of the Institute information cell of IIT Kharagpur. He has published more than 200 research papers in reputed journals including IEEE, ACM, Elsevier, and conference proceedings. His current research interests include spatial data science, spatial web services, and cloud computing. He is a senior member of IEEE.
Dr. Rajkumar Buyya is a Redmond Barry Distinguished Professor and Director of the Cloud Computing and Distributed Systems (CLOUDS) Laboratory at the University of Melbourne, Australia. He is also serving as the founding CEO of Manjrasoft, a spin-off company of the University, commercializing its innovations in Cloud Computing. He served as a Future Fellow of the Australian Research Council during 2012-2016. He has authored over 625 publications and seven text books including "Mastering Cloud Computing" published by McGraw Hill, China Machine Press, and Morgan Kaufmann for Indian, Chinese and international markets respectively. He also edited several books including "Cloud Computing: Principles and Paradigms" (Wiley Press, USA, Feb 2011). He is one of the highly cited authors in computer science and software engineering worldwide (h-index=139, g-index=307, 106,000+ citations).  "A Scientometric Analysis of Cloud Computing Literature" by German scientists ranked Dr. Buyya as the World's Top-Cited (#1) Author and the World's Most-Productive (#1) Author in Cloud Computing.  Dr. Buyya is recognized as a "Web of Science Highly Cited Researcher" for five consecutive years since 2016, a Fellow of IEEE, and Scopus Researcher of the Year 2017 with Excellence in Innovative Research Award by Elsevier and recently (2019) received "Lifetime Achievement Awards" from two Indian universities for his outstanding contributions to Cloud computing and distributed systems.Software technologies for Grid and Cloud computing developed under Dr.Buyya's leadership have gained rapid acceptance and are in use at several academic institutions and commercial enterprises in 40 countries around the world. Dr. Buyya has led the establishment and development of key community activities, including serving as foundation Chair of the IEEE Technical Committee on Scalable Computing and five IEEE/ACM conferences. These contributions and international research leadership of Dr. Buyya are recognized through the award of "2009 IEEE Medal for Excellence in Scalable Computing" from the IEEE Computer Society TCSC. Manjrasoft's Aneka Cloud technology developed under his leadership has received "2010 Frost & Sullivan New Product Innovation Award". Recently, Dr. Buyya received "Mahatma Gandhi Award" along with Gold Medals for his outstanding and extraordinary achievements in Information Technology field and services rendered to promote greater friendship and India-International cooperation. He served as the founding Editor-in-Chief of the IEEE Transactions on Cloud Computing. He is currently serving as Co-Editor-in-Chief of Journal of Software: Practice and Experience, which was established ~50 years ago.