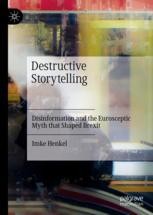 Disinformation and the Eurosceptic Myth that Shaped Brexit

This book offers a new approach to understanding disinformation and its destructive impact on the democratic function of the news media. Using the notoriously false reporting of EU policies by the British press as a starting point, it utilises Critical Discourse Analysis to examine the linguistic properties of false news stories and to understand how they function as myth in Roland Barthes’ sense. The disinformation is essential for the impact these news stories had as it provides the simplification which creates the blissful clarity of myth that Barthes described. As myth, the false news stories depoliticised a political argument and naturalised the claim of antagonistic British-European relations. Henkel shows how news stories used disinformation to articulate a Eurosceptic myth of the feisty, witty Briton who stands up against the European bully. Her main argument is that the disinformation contributed to the Brexit vote because, as myth, it transported an ideology. Henkel argues that the Brexit debate and the news reporting that preceded it for decades can be understood as a case study for how political journalism becomes democratically dysfunctional. This book will be of interest to students and scholars of journalism, media and culture, political communication, and Critical Discourse Analysis.

Imke Henkel is a Senior Lecturer in Journalism at the University of Lincoln, UK. She is a former political journalist who wrote for top German national newspapers including Sueddeutsche Zeitung and Die Zeit, as well as being the UK and Ireland correspondent for the German news magazine Focus for ten years. Her research focuses, among other topics, on how the British media report European issues.

“How come a mature Western democracy suddenly lost its sense of reality? This superb and timely study shows how insights from discourse analysis and communication studies can be applied to political discourse in the post-truth era. I know of no better attempt than Henkel’s monograph to lead us through the swirling knot of lies that British political discourse has been unable to escape.” (Johannes Angermuller, The Open University, UK)

“Imke Henkel has produced an authoritative account of how tens of thousands of little media lies produced the myth that a sinister European Union was swindling honest Brits. Do not be deceived by the author’s calm tone and academic rigour. This is the authentically shocking story of how Conservative journalists and politicians sent Britain down the road to ruin.” (Nick Cohen, author and Observer columnist)

“Imke Henkel constructs with tremendous thoroughness and moral passion a formidable case against the way Boris Johnson, and other British journalists, covered the Brussels story. In my next book I shall try to explain why I disagree with her.” (Andrew Gimson, author of Boris: The Making of the Prime Minister (2016))

“This book is both an essential and chilling read for anyone interested in the ideological origins of the Brexit project. Based on a painstaking analysis of how British news media helped to spread misleading and false stories about the EU, the book demonstrates the ability of compelling myths to undermine democracy.” (Karin Wahl-Jorgensen, Cardiff University, UK, author of Emotions, Media and Politics (2019))

“Henkel has written a much-needed book on the power of myths and journalistic narratives in fostering disinformation around Brexit. Grounded in Barthes' ground-breaking work, the analysis dissects myths perpetuated by news organizations that laid the ideological groundwork for anti-EU attitudes and policies. Henkel admirably shows how news and ideology are intertwined and function in so-called "post-truth" times.” (Silvio Waisbord, George Washington University, USA, author of The Communication Manifesto (2020))