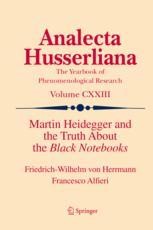 Martin Heidegger and the Truth About the Black Notebooks

Toward the beginning of 2013, I received reports of passages in the Black Notebooks that offered observations on Jewry, or as the case may be, world Jewry. It immediately became clear to me that the publication of the Black Notebooks would call forth a wide-spread international debate. Already in the Spring of 2013, I had asked Professor Friedrich-Wilhelm von Herrmann, last private assistant – and in the words of my grandfather, the “chief co-worker of the complete edition”, – if he might review the Notebooks as a whole, based on his profound insight into the thought of Martin Heidegger, and in particular, review those Jewish-related passages that were the focus of the public eye.

Publications about the Black Notebooks quickly came to propagate catchy expressions such as “being-historical anti-Semitism” and “metaphysical anti-Semitism”. The first question that obviously arises is: Does the thought of Martin Heidegger exhibit any kind of anti-Semitism at all?

In this book Professor von Herrmann now advances his hermeneutic explication. With Professor Francesco Alfieri of the Pontificia Università Lateranense he has found a colleague who has drawn up a comprehensive philological analysis of volumes GA 94 through GA 97 of the Complete Edition.

The fact that Heidegger designated the hitherto published “black notebooks” as Ponderings (Überlegungen) and as Observations (Anmerkungen) has been given little consideration. He intentionally placed them at the conclusion of the Complete Edition because without acquaintance with the lectures, and above all, with the being-historical treatises that would come to be published in the framework of the Complete Edition, they would not be comprehensible.

Friedrich-Wilhelm von Herrmann, ​was assistant of Eugen Fink (from 1961 to 1970) and last private assistant of Martin Heidegger (from 1972 to 1976). At the behest of Heidegger he was appointed main scientific editor responsible for the Gesamtausgabe starting in 1975, still in publication. From 1979 to 2000 he occupied the chair of philosophy at the University of Freiburg, Germany. His research not only focuses on the Heideggerian corpus, but is also concentrated on Husserl, Augustine, Descartes and Lebiniz.
Francesco Alfieri is professor of philosophy at the University Vita-Salute San Raffaele, Milan, Italy. From 2014, he was appointed private assistant to professor Friedrich-Wilhelm von Herrmann. He is the Editor-in-Chief for the annotated Italian edition of the complete works of H. Conrad-Martius and the book series “Philosophy – Phenomenology – Texts by Anna-Teresa Tymieniecka”, published by Morcelliana.