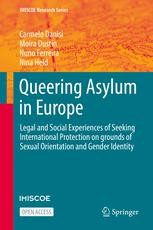 This two-volume open-access book offers a theoretically and empirically-grounded portrayal of the experiences of people claiming international protection in Europe on the basis of their sexual orientation or gender identity (SOGI). It shows how European asylum systems might and should treat asylum claims based on people’s SOGI in a fairer, more humane way. Through a combined comparative, interdisciplinary (socio-legal), human rights, feminist, queer and intersectional approach, this book examines not only the legal experiences of people claiming asylum on grounds of their SOGI, but also their social experiences outside the asylum decision-making framework. The authors analyse how SOGI-related claims are adjudicated in different European frameworks (European Union, Council of Europe, Germany, Italy and UK) and offer detailed recommendations to adequately address the intersectional experiences of individuals seeking asylum. This unique approach ensures that the book is of interest not only to researchers in migration and refugee studies, law and wider academic communities, but also to policy makers and practitioners in the field of SOGI asylum.

Dr Moira Dustin is a Lecturer in the School of Law, Politics and Sociology, where she also leads on Knowledge Exchange and Engagement for the School. She joined the University of Sussex as a Research Fellow in 2016 working on the European Research Council project SOGICA - Sexual Orientation and Gender Identity Claims of Asylum: A European human rights challenge (2016-2020). Moira has a PhD in Gender Studies from the London School of Economics where she is a Visiting Fellow at the Centre for Analysis of Social Exclusion (CASE). Before joining the University of Sussex, she was Director of Research and Communications at the Equality and Diversity Forum, a network of equality and human rights organisations, where she coordinated the Equality and Diversity Research Network. Moira has also worked at the Refugee Council, providing advice and information and developing national services for refugees and asylum-seekers. She has worked as a freelance sub-editor on the Guardian and Independent newspapers and was the Information Worker for the Carnegie Inquiry into the Third Age.

Dr Nina Held is a Teaching Fellow in Sociology at the University of Sussex. From 2016-2020 she worked as a post-doctoral researcher on the ERC-funded project SOGICA - Sexual Orientation and Gender Identity Claims of Asylum: A Human Rights Challenge. She has a PhD in Women's Studies from the Centre for Gender and Women’s Studies at Lancaster University (2011). Before joining Sussex, Nina worked as Centre Co-ordinator at Freedom from Torture and as Development Worker at Trafford Rape Crisis. For seven years, she was the chair and a volunteer for the Lesbian Immigration Support Group in Manchester.

​This book is a timely and enormously important contribution to the field of refugee studies. This work situates SOGI asylum seekers in context by addressing both the legal issues and lived experiences of refugees seeking protection in Germany, Italy and the UK, and by interweaving analysis of RSD with interviews and observational data. This makes a valuable addition to interdisciplinary and comparative work on both SOGI applicants and European asylum systems.Jenni Millbank, Professor of Law at the University of Technology Sydney (Australia)

This ambitious volume presents a wealth of research. Anchored in theory as well as in the stories of SOGI asylum seekers and refugees, the book admirably blends concepts, frames and insights of refugee law and policy, with human rights as well as feminist and queer studies. It offers sophisticated scholarly analysis as well as policy recommendations. It is likely to become a key reference in this field.Eva Brems, Professor of Human Rights Law at Ghent University (Belgium)

I find the publication of this book, which explores the social and legal experiences of people across Europe claiming international protection on the basis of their sexual orientation or gender identity (SOGI), particularly timely and appropriate. The European Court of Human Rights is regularly confronted with this kind of issues. A recent case, still pending before the Court (B. v. Switzerland, no. 43987/16), concerns the alleged risk of treatment in breach of Article 3 (prohibition of torture and inhuman or degrading treatment) of the European Convention on Human Rights faced by a homosexual man in the event of his being returned to Gambia. The Court gave notice of the application to the Swiss Government and put questions to the parties under Article 3 of the Convention. No doubt the material collected in the book is certainly helpful when dealing with this kind of sensitive cases, not only at the level of the European Court, but also for national judges, who are clearly on the frontline in this connection.Guido Raimondi, former judge and President of the European Court of Human Rights

Rainbow Railroad exists to find hundreds of LGBTQI people facing persecution due to state sponsored homophobia and transphobia, a pathway to safety. As such, a timely and urgently needed analysis of the arduous challenges LGBTIQ+ refugees face in the European refugee system, Queering Asylum in Europe skilfully unravels and examines the legal, political, and socio-economic layers that currently contextualize the experience of queer asylum seekers on both a national and EU-wide level. Throughout the book, the ambitious empirical analysis centres on the struggles of this double marginalized group and exposes the inherent weaknesses of asylum systems in Germany, Italy, and the UK. Its findings on discriminatory practices, transphobia, and the stereotyping of LGBTIQ+ individuals in the processing of refugee applications are a harsh reminder that we need to do better to serve those who need it most. Queering Asylum in Europe delivers evidence-based recommendations on how we can accomplish this and constitutes a valuable resource for policy leaders and non-profit organizations – and anybody committed to bettering the lives of the global LGBTIQ+ community.Kimahli Powell, Executive Director at Rainbow Railroad (Canada)

As a lesbian refugee and founder of a charity, African Rainbow Family, that supports over 500 LGBTIQ+ people seeking asylum in the UK, it is safe to say that Queering Asylum in Europe is a true representation of what life is for anyone seeking sanctuary based on their sexual orientation and/or gender identity. The wealth of resources contained in this book will in no doubt be useful for professionals supporting or planning to support LGBTIQ+ people seeking asylum. Decision-makers will also find it useful in guiding their decisions and policies in relation to claiming asylum due to sexual orientation and/or gender identity.Aderonke Apata, founder of African Rainbow Family (UK)

Queering Asylum in Europe is a result of hard work and dedication by authors Carmelo Danisi, Moira Dustin, Nuno Ferreira and Nina Held, who have been working on the SOGI asylum system and the legality revolving around it for four long years. The empirical data and the results thereof are a proof of the commitment that the authors and participants have/had towards SOGI cases in Europe. The book follows a systematic order of contents with empirical evidences to make it easy for the reader to see the facts and draw their own conclusion on the given matters in each chapter. I would recommend this book to all people who are working in this field so that you can find more solutions to the existing situations of SOGI asylum claimants in Europe.Lilith Raza, LSVD Queer Refugees Deutschland (Germany)