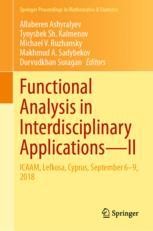 Functional analysis is an important branch of mathematical analysis which deals with the transformations of functions and their algebraic and topological properties. Motivated by their large applicability to real life problems, applications of functional analysis have been the aim of an intensive study effort in the last decades, yielding significant progress in the theory of functions and functional spaces, differential and difference equations and boundary value problems, differential and integral operators and spectral theory, and mathematical methods in physical and engineering sciences. The present volume is devoted to these investigations.
The publication of this collection of papers is based on the materials of the mini-symposium  "Functional Analysis in Interdisciplinary Applications" organized in the framework of the Fourth International Conference on Analysis and Applied Mathematics (ICAAM 2018, September 6–9, 2018). Presenting a wide range of topics and results, this book will appeal to anyone working in the subject area, including researchers and students interested to learn more about different aspects and applications of functional analysis. Many articles are written by experts from around the world, strengthening international integration in the fields covered. The contributions to the volume, all peer reviewed, contain numerous new results.
This volume contains four different chapters. The first chapter contains the contributed papers focusing on various aspects of the theory of functions and functional spaces. The second chapter is devoted to the research on difference and differential equations and boundary value problems. The third chapter contains the results of studies on differential and integral operators and on the spectral theory. The fourth chapter is focused on the simulation of problems arising in real-world applications of applied sciences.

Dr. Ashyralyev was born in Konekesir/Turkmenistan in 1955. He completed his a high school education in 1972 in Konekesir with a gold medal for excellence at Secondary School Level.

He graduated from the Turkmen State University in 1977. He was awarded with the Lenin’s Grant for Students during his education (1974-1977).

He earned his PhD from the Voronezh State University in 1983, and his Doctorate of Sciences from the same University and the Institute of Mathematics of the Ukraine Academy of Sciences in 1992. Ashyralyev had been awarded the First Rank Prize for PhD students upon his graduation in 1983.

Dr. Ashyralyev continued his career at the Turkmen State University from 1977 to 1999 as an instructor, assistant professor (1985), associate professor (1989), and professor (1995), respectively.

In 1996 Ashyralyev had been awarded the title Master Teacher of Turkmenistan by Ministry of Education, Turkmenistan.

Since 1999 to June 30, 2016, Prof. Ashyralyev has been a staff member of the Department of Mathematics and Elementary Mathematics Education, FU, Turkey and visiting professor at the ITTU, Turkmenistan.

Since 2015 Prof. Ashyralyev has been a visiting Professor, Institute of Mathematics and Mathematical Modeling, Almaty, Kazakhstan and since 01.04.2017 visiting professor at the Peoples' Friendship University of Russia (RUDN), Russia.

The research interests of A. Ashyralyev are broad and include different problems of numerical functional analysis, well-posedness of differential and difference problems, construction and investigation of high order of accuracy difference schemes for partial differential equations, uniform difference schemes and asymptotic formulas for singular perturbation problems for partial differential equations, study of positivity of differential and difference operators and structure of fractional spaces generated by positive differential and difference operators in Banach spaces, investigation of difference schemes for stochastic partial differential equations, study of identification problems, fractional calculus, and mathematical modeling. He is the author of more than 370 scientific papers in international journals and conference proceedings (237 of them are in Web of Science Core Collection journal publications) and he is the author of 12 books including two monographs published by Birkhauser-Verlag, on Operator Theory: Advances and Applications. He has been guest editor of 6 volumes of special issues of international ISI journals and coeditor of 6 volume of AIP Conference Proceedings. He has successfully supervised 26 PhD and 33 MS students. His h-index is 25.

Dr. Ashyralyev’s contribution to science and technology within Turkmenistan and Turkey has been tremendous, and could be gauged from his active participation in a number of national research and academic organizations. Furthermore, his contribution in science and technology at the international level is equally remarkable, and is evident from his current joint research with scientists in different countries including USA, Germany, Saudi Arabia, Russia, Poland, Spain, Brazil, Hungary, Uzbekistan, Azerbaijan, Nigeria, Libya, Bulgaria, Algeria, Kyrgyzstan, Irak, Jordan and Kazakhstan.

Prof. Ashyralyev was selected as Thomson-Reuters Science Leader in the World Science Researchers from the Central Asian Region in 2015 and he was elected as a Fellow of the Islamic Academy of Sciences in 2012. In 2017 hе was awarded with diploma for a significant contribution to the development of mathematical science by the Turkic World Mathematical Society(TWMS). Due to academic activities in 2017, by the Rectorate of Near East University was awarded the Publication Honor Award. In 2019 he became a winner of the Scopus Award Kazakhstan- 2019 of International Scopus Award.

Tynysbek Kalmenov is a Kazakhstani mathematician who graduated from the Novosibirsk State University in 1969 and received his doctorate in physical-mathematical sciences in 1983 from the Lomonosov Moscow State University. He is a specialist in the field of Ordinary Differential Equations, Partial Differential Equations, Equations of Mathematical Physics, Functional Analysis, Operators Theory. Currently, he is a leading researcher at the Institute of Mathematics and Mathematical Modeling in Almaty, Kazakhstan.

Michael Ruzhansky is a Senior Full Professor of Mathematics at Ghent University, Belgium, and a Professor of Mathematics at the Queen Mary University of London, United Kingdom. He is currently also an Honorary Professor of Pure Mathematics at Imperial College London, where he has been working in the period 2000-2018. His research is devoted to different topics in the analysis of partial differential equations, harmonic and non-harmonic analysis, spectral theory, microlocal analysis, as well as the operator theory and functional inequalities on groups. His research was recognised by the ISAAC Award 2007, Daiwa Adrian Prize 2010, as well as by the Ferran Sunyer I Balaguer Prizes in 2014 and 2018.

Durvudkhan Suragan is an associate professor at Nazarbayev University. He won the Ferran Sunyer i Balaguer Prize in 2018. He has previously worked in spectral geometry, and in the theory of subelliptic inequalities at Imperial College London as a research associate and as a leading researcher at the Institute of Mathematics and Mathematical Modeling in Almaty, Kazakhstan.
Show all