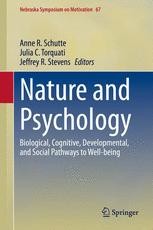 This volume is comprised of contributions to the 67th Nebraska Symposium on Motivation, which brought together various research disciplines such as psychology, education, health sciences, natural resources, environmental studies to investigate the ways in which nature influences cognition, health, human behavior, and well-being. The symposium is positioned to explore two proposed mechanisms in the most depth: 1) the psycho-evolutionary theory of stress recovery and 2) Attention Restoration Theory. The contributions in the volume represent research guided by both of these posited mechanisms, rigorously examine these theories and processes, and share methodological innovations that can be utilized across programs of research. This volume will be of great interest to researchers on natural environments, practitioners and clinicians working with an environmental lens at the intersection of psychology, social work, education and the health sciences, as well as researchers and students in environmental and conservation psychology.

Anne R. Schutte received her Ph. D. from the University of Iowa and is currently an Associate Professor at the University of Nebraska-Lincoln in the Department of Psychology and is a resident faculty in the Center for Brain, Biology & Behavior. Her research interests are in the area of cognitive development, with a particular focus on the envrionmental factors, such as natural environments, that influence cognition.

Julia Torquati is a Professor in the Department of Child, Youth and Family Studies at the University of Nebraska-Lincoln and Buffett Early Childhood Institute Community Chair in Infant Mental Health. She conducts research on the role of teachers’ attachment security and reflective function on the quality of teacher-child relationships, and the influence of natural environments on children’s development.

Jeffrey R. Stevens is an Associate Professor at the University of Nebraska-Lincoln in the Department of Psychology, having received his Ph.D. in Ecology, Evolution, and Behavior at the University of Minnesota. In addition to being a faculty member in the Department of Psychology, he is also a resident faculty member of the Center for Brain, Biology & Behavior. Dr. Stevens' research integrates cognitive and evolutionary perspectives to study decision making in humans and other animals.