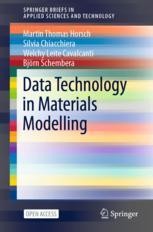 This open access book discusses advances in semantic interoperability for materials modelling, aiming at integrating data obtained from different methods and sources into common frameworks, and facilitating the development of platforms where simulation services in computational molecular engineering can be provided as well as coupled and linked to each other in a standardized and reliable way. The Virtual Materials Marketplace (VIMMP), which is open to all service providers and clients, provides a framework for offering and accessing such services, assisting the uptake of novel modelling and simulation approaches by SMEs, consultants, and industrial R&D end users. Semantic assets presented include the EngMeta metadata schema for research data infrastructures in simulation-based engineering and the collection of ontologies from VIMMP, including the ontology for simulation, modelling, and optimization (OSMO) and the VIMMP software ontology (VISO).

Martin Thomas Horsch graduated with a diploma degree in computer science from the University of Stuttgart (2006) and with a doctorate in mechanical engineering from the University of Paderborn (2010). In 2011, he was appointed as a junior professor at TU Kaiserslautern, where he obtained the habilitation in computational engineering (2016). In 2018, he joined STFC Daresbury Laboratory and, in 2020, the High-Performance Computing Center Stuttgart.

Björn Schembera studied computer science and philosophy at the University of Stuttgart where he received a diploma degree in computer science (2011) and a doctorate in energy, process, and bio-engineering (2019) with a thesis on research data management for simulation sciences. Since 2011, he has been a research associate at the national High-Performance Computing Center Stuttgart (HLRS) working in research data management. His scientific interests include dark data, distributed systems as well as philosophy of computer simulation and information technology and society.

Welchy Leite Cavalcanti is a theoretical physicist with strong background in computer simulations working in the “Applied Computational Chemistry” group at IFAM since 2008. Before joining IFAM, she worked as a postdoc in computational science in the groups of Prof. Florian Müller Plathe (Bremen and Darmstadt – 2003 to 2006) and Prof. Thomas Frauenheim (Bremen 2006 to 2008). Besides her scientific activities on the computational modelling to investigate properties of polymeric materials, she has established and coordinated several ongoing collaborations and exchange programmes in Europe, and between Europe and Brazil. She is active in international project management and presently coordinates the H2020 project VIMMP (Grant no. 760907).