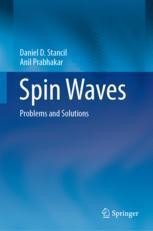 This book presents a collection of problems in spin wave excitations with their detailed solutions. Each chapter briefly introduces the important concepts, encouraging the reader to further explore the physics of spin wave excitations and the engineering of spin wave devices by working through the accompanying problem sets. The initial chapters cover the fundamental aspects of magnetization, with its origins in quantum mechanics, followed by chapters on spin wave excitations, such as the magnetostatic approximation, Walker's equation, the spin wave manifold in the three different excitation geometries of forward volume, backward volume and surface waves, and the dispersion of spin waves. The latter chapters focus on the practical aspects of spin waves and spin wave optical devices and use the problem sets to introduce concepts such as variational analysis and coupled mode theory. Finally, for the more advanced reader, the book covers nonlinear interactions and topics such as spin wave quantization, spin torque excitations, and the inverse Doppler effect.

The topics range in difficulty from elementary to advanced. All problems are solved in detail and the reader is encouraged to develop an understanding of spin wave excitations and spin wave devices while also strengthening their mathematical, analytical, and numerical programming skills.

Anil Prabhakar is Professor at the Department of Electrical Engineering, IIT Madras, since 2002. He received his B.Tech. degree in Engineering Physics from IIT Bombay in 1992, and the M.S. and Ph.D. degrees from Carnegie Mellon University in 1995 and 1997, respectively. From 1997 to 2002, he was a design engineer at MKE-Quantum, and a staff engineer and a manager at Read-Rite Corporation, responsible for the design, characterization, and failure analysis of magnetic recording heads for hard disk drives. He is currently a member of the LIGO-India Scientific Management Board, and on the Editorial Board of Nature Scientific Reports and IEEE Transaction of Magnetics.