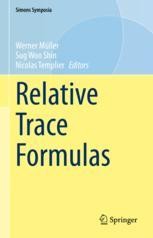 A series of three symposia took place on the topic of trace formulas, each with an accompanying proceedings volume. The present volume is the third and final in this series and focuses on relative trace formulas in relation to special values of L-functions, integral representations, arithmetic cycles, theta correspondence and branching laws. The first volume focused on Arthur’s trace formula, and the second volume focused on methods from algebraic geometry and representation theory. The three proceedings volumes have provided a snapshot of some of the current research, in the hope of stimulating further research on these topics. The collegial format of the symposia allowed a homogeneous set of experts to isolate key difficulties going forward and to collectively assess the feasibility of diverse approaches.

​Werner Müller is Professor Emeritus at the Mathematical Institute of the University of Bonn.  His research interests include geometric analysis, scattering theory, analytic theory of automorphic forms, and harmonic analysis on locally symmetric spaces. His work has been published in many journals, including Annals of Mathematics,  Inventiones Mathematicae, Geometric and Functional Analysis, and Communications in Mathematical Physics.

Sug Woo Shin is Professor of Mathematics at the University of California at Berkeley. His research is centered on number theory, Shimura varieties, Langlands functoriality, trace formula, and automorphic forms. His work has appeared in many journals, including Inventiones Mathematicae, Mathematische Annalen, and the Israel Journal of Mathematics.

Nicolas Templier is Associate Professor of Mathematics at Cornell University. His work focuses on number theory, automorphic forms, arithmetic geometry, ergodic theory, and mathematical physics. His list of publications include articles in Inventiones Mathematicae, the Ramanujan Journal, and the Israel Journal of Mathematics.