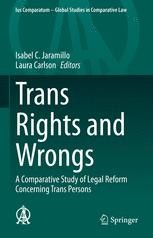 This book maps various national legal responses to gender mobility, including sex and name registration, access to gender modification interventions, and anti-discrimination protection (or lack thereof) and regulations. The importance of the underlying legislation and history is underlined in order to understand the law’s functions concerning discrimination, exclusion, and violence, as well as the problematic nature of introducing biology into the regulation of human relations, and using it to justify pain and suffering. The respective chapters also highlight how various governmental authorities, as well as civil society, have been integral in fostering or impeding the welfare of trans persons, from judges and legislators, to medical commissions and law students. A collective effort of scholars scattered around the globe, this book recognizes the international trend toward self-determination in sex classification and a generous guarantee of rights for individuals expressing diverse gender identities. The book advocates the dissemination of a model for the protection of rights that not only focuses on formal equality, but also addresses the administrative obstacles that trans persons face in their daily lives. In addition, it underscores the importance of courts in either advancing or obstructing the realization of individual rights.

Isabel C. Jaramillo is a full professor of Law at Universidad de los Andes, Bogotá. She has played a leading role in the consolidation of feminist legal thinking in Latin America, where her contributions to the debate about feminist legal reform and feminist legal education are widely acknowledged. Her latest works in English include: “Latin American feminist legal theory: taking multiple subordinations seriously” in  Rachel Sieder, Karina Ansolabehere and Tatiana Alfonso, Routledge Handbook on Latin American Law and Society (2019); and  “Feminism in transition” in Janet Halley, Rachel Rebouche, Prabah Kotiswaran and Hila Shamir, Handbook of Governance Feminism: Notes from the Field, Minneapolis, University of Minnesota Press (2019).

Laura Carlson is a professor in private Law specializing in labor and discrimination law as well as, Academic Director of Internationalization and Head of Labor Law at Stockholm University’s Department of Law. She has written several books and articles on discrimination law from comparative perspectives, the books include, Searching for Equality, Comparative Discrimination Law: Historical and Theoretical Frameworks and the most recent, Workers, Collectivism and the Law: Grappling with Democracy. She is editor-in-chief of the Brill Research Perspectives in Comparative Discrimination Law, Board Member in the European Women Lawyers Association, Board Member of the Berkeley Center on Comparative Equality & Anti­Discrimination Law and Co-Chair of the Center’s Equality and Covid-19 working group.​
Show all