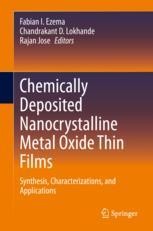 This book guides beginners in the areas of thin film preparation, characterization, and device making, while providing insight into these areas for experts. As chemically deposited metal oxides are currently gaining attention in development of devices such as solar cells, supercapacitors, batteries, sensors, etc., the book illustrates how the chemical deposition route is emerging as a relatively inexpensive, simple, and convenient solution for large area deposition. The advancement in the nanostructured materials for the development of devices is fully discussed.

Fabian Ezema is a Professor at the University of Nigeria, Nsukka. He obtained a PhD and MSc. in Physics and Astronomy from University of Nigeria, Nsukka and a BSc from the then Anambra State University of Science and Technology, Enugu. His researches are on several areas of Materials Science: synthesis and characterizations of particles and thin film materials through chemical routes with emphasis on energy applications. He is interested in materials for thin film solar cells fabrication and nanoparticle synthesis. For the last 15 years, he has been working on the nano/submicron-sized materials for energy conversion and storage (cathodes, anodes, supercapacitors, thin film solar cells, DSSC, etc), including novel methods of synthesis, characterization and evaluation of the electrochemical and optical properties. He was a CV Raman Fellow at the Shivaji University Kolhapur India in 2011 and MIF Fellow at Tokyo University of Science, Japan in 2013. He is a visiting professor to NRS-EMT (MATECSS UNESCO Chair) in Varennes, Quebec, Canada and iThemba Labs South Africa. He is also a Fellow of UNESCO-UNISA South Africa Chair in Nanosciences and Nanotechnology (U2ACN2). He was awarded University of South Africa (UNISA) visiting researcher program (VRP). Fabian is a senate representative to National Center for Energy Research and Development (NCERD) University of Nigeria, and due to his commitment to research and international visibility was appointed Pioneer Acting Director, International Office of the University of Nigeria after the approval of the office by the University Senate. He has served as Coordinator, Natural Science Unit, School of General Studies, UNN. He is the Coordinator Nano Research Group, University of Nigeria, Nsukka. He is the pioneer Dean, Faculty of Natural and Applied Sciences, Coal City University Enugu, Nigeria. Fabian has published over 180 high impact papers in various national and international journals and gave over 50 talks at various conferences, workshops and seminars. His h-index is 24, i10 index of 88 with over 2409 citations as in google scholar.

Prof C D Lokhande is presently working as a Dean and Research Director at D Y Patil Education Society (Deemed to be University), Kolhapur, India. He has been working on several areas of thin film technology, ranging from chemical synthesis of thin films to their applications in solar cells, gas sensors, and supercapacitors. Moreover, he made a great contribution in designing several prototype devices such as supercapacitors and heterojunction-based room temperature gas sensors. He received his Ph.D. from Shivaji University, Kolhapur in 1984, without viva voce examination as his thesis was adjudged as “Excellent.” Later, in 1987, he joined as assistant professor in Physics and became professor and Head at Shivaji University, Kolhapur, immediately after accomplishing his first postdoctoral stay at the Weizmann Institute of Science, Israel.  He has won many awards and received many honors. He was appointed as Fellow of Institute of Physics, London, in 1990; was visiting scientist in the Indo-Polish CEP scheme in 1991; was INSA Visiting Fellow in 1993; is the first recipient from Shivaji University of the prestigious Alexander von Humboldt Fellowship, Germany, in 1996 and Brain Pool fellowship of South Korea in 2003; was participant in Noble Laureates Meeting, Lindau, Germany in 2001; was visiting professor at Hanyang University, South Korea in 2006; was awarded a Rajya Shishak Purshakar, Government of Maharashtra State in 2009, and Best Teacher Award from Shivaji University in 2010. He is presently an editorial board member of “Electrochemical Energy Technology,” De Gruyter; the fellow, Maharashtra Academy of Sciences from 2012; an expert member, distinguished visiting professor in polymer chemistry, Institute of Chemical Technology, Mumbai from 2012. He is the author of more than 600 papers in international journals with “h” index 90 and more than 29,000 citations, edited 11 books, filed more than 45 patents, and directed more than 60 Ph.D. theses.  Recently, he has been listed at first position in top 2% scientists in the subject of Applied Physics in India by the Stanford University Survey.

Professor Rajan Jose supervises the Nanostructured Renewable Energy Materials Laboratory in the Universiti Malaysia Pahang (UMP) and is the Associate Editor-in-Chief of the Springer Nature journal “Materials Circular Economy”. He has investigated nanostructured perovskite ceramics for microwave and superconducting electronics during doctoral research at the Council of Scientific and Industrial Research (CSIR), Trivandrum, India and has received PhD degree in the year 2002. He has contributed to the science and engineering of diverse range of materials including metals and alloys, luminescent quantum dots for biological and energy applications, glass and glass ceramics for quantum electronics, and electrochemical materials for energy conversion and storage. He was employed as a scientist at the Indira Gandhi Centre for Atomic Research (India), AIST (Japan), Toyota Technological Institute (Japan), and the National University of Singapore (Singapore) before joining UMP. He has published over 220 papers in Web of Science (Thomson Reuters) indexed journals which are cited nearly 11000 times with an h-index of 55. He holds 25 patents nationally and internationally. He has been listed as the top 2% Materials Scientists by the Stanford University. He has supervised 6 Postdoctoral, 23 Doctoral, and 10 Master’s researchers. His current research interests include circular economy, data science, renewable materials and devices; most of his research is on the structure – property relationship in materials for a desired device functionality.