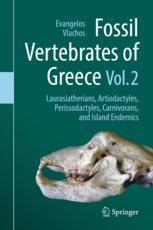 This 2-volume set provides a state-of-the-art study of the fossil record and taxonomy of the main vertebrate groups from Greece. Greece stands between 3 continents and its vertebrate fossil record is of great importance for paleontological and evolutionary studies in Europe, Asia and Africa. Fossils from classic, world-famous localities (e.g., Pikermi, Samos) form an essential part of the collections of the most important museums in the world and have been studied by numerous scientists. Recent paleontological research led to the discovery and study of numerous new sites. The volumes contain a taxonomic review of all named and identified taxa, their taxonomic history and current status, as well as historical, phylogenetic and biogeographic information.

Volume 2 contains a synopsis of the fossil record and taxonomy of important groups of mammals represented in the fossil record of Greece. The volume starts with specific chapters on laurasiatherians like insectivores and bats, moving on to the main part of the book that deals with three of the most important fossil groups in the country. The fossil record of even-toed animals is summarized with chapters on bovids, cervids, suoids, anthracotheres, hippos, giraffes, and tragulids. The fossil record of odd-toed animals is presented with special chapters on horses, tapirs, rhinos, and chalicotheres. The last part of this volume deals with meat-eating, carnivoran groups, like felids, viverrids, hyaenas, canids, bears, ailurids, mephitids and mustelids. The volume ends with a special chapter on insular endemic mammals from the various islands of Greece.

Dr. Evangelos Vlachos is a researcher at CONICET and Museo Paleontológico Egidio Feruglio in Argentina.