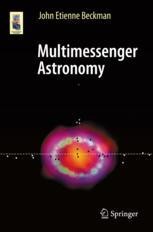 Written by a professional astronomer who has worked on a wide spectrum of topics throughout his career, this book gives a popular science level description of what has become known as multimessenger astronomy. It links the new with the traditional, showing how astronomy has advanced at increasing pace in the modern era.

In the second decade of the twenty-first century astronomy has seen the beginnings of a revolution. After centuries when all our information about the Universe has come via electromagnetic waves, now several entirely new ways of exploring it have emerged. The most spectacular has been the detection of gravitational waves in 2015, but astronomy also uses neutrinos and cosmic ray particles to probe processes in the centres of stars and galaxies.

The book is strongly oriented towards measurement and technique. Widely illustrated with colourful pictures of instruments, their creators and astronomical objects, it is backed with descriptions of the underlying theories and concepts, linking predictions, observations and experiments. The thread is largely historical, although obviously it cannot be encyclopaedic. Its point of departure is the beginning of the twentieth century and it aims at being as complete as possible for the date of completion at the end of 2020.

The book addresses a wide public whose interest in science is served by magazines like Scientific American: lively, intelligent readers but without university studies in physics.
Show all
About the authors

John Beckman is Emeritus Research Professor of Astrophysics at the Instituto de Astrofísica de Canarias. A graduate of Oxford University in Theoretical Physics, he read for his D.Phil. in Astrophysics at the same university, where he later was awarded the higher doctorate of D.Sc. After a postdoc at University of California Berkeley he took a post at NASA’s Jet Propulsion Laboratory, (Caltech) where he was Project Scientist for the infrared radiometer on the Mariner 6 probe to Mars. Returning to England he lectured at Queen Mary University of London, joining a pioneer group in millimetre wave astronomy, where as well as working in solar physics his group was the first to measure the peak in the Cosmic Microwave Background spectrum, almost a decade before the COBE measurement from space. During this period he participated in observing the chromosphere from the Concorde aircraft, during the longest total solar eclipse in history, of 74 minutes’ duration. After a period at the European Space Agency’s ESTEC facility he was invited to be the first research director of the Instituto de Astrofísica de Canarias, where he has been working ever since.

His interests have moved outwards from planets, via the Sun, to stars and finally galaxies. His present research is on the structure and evolution of galaxies using the wide range of instruments available at the Canary Island Observatories.

He has directed 35 PhD theses and a similar number of MSc dissertations, and has over 650 entries in the ADS astronomy publications website. His outreach activities have included hundreds of lectures to schools, universities, and amateur astronomy clubs in a dozen countries. He is the scientific director, and lecturer, at the “Jornadas Astronomicas de Almería” which, starting in 2005, has brought high level popular astronomy to the public at an annual event at which, among others, 7 Nobel Laureates and 7 ESA and NASA astronauts have given lectures.

His research experience is unusually varied, The “Festschift” given for John to celebrate his 40 years in astronomy was entitled “Pathways through an Eclectic Universe”. This wide range of knowledge makes him a suitable author for a book on Multimessenger Astronomy, in which he aims to incorporate the newest ways of observing the Universe, via neutrinos and gravitational waves, into the panoramic range of observations made using the full span of the electromagnetic spectrum.