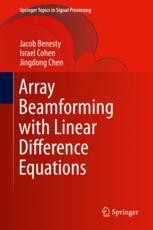 This book studies the link between differential beamforming and differential equations which in turn enables the study of fundamental theory and methods of beamforming from a different perspective, leading to new insights into the problem and new methods to solve the problem. The book first presents a brief overview of the problems and methods for beamforming and some performance measures popularly used either to evaluate beamformers or to derive optimal beamformers. Then, first-order, second-order, and general high-order linear difference equations are discussed, based on which the authors show how to formulate the beamforming problem and derive different beamforming methods, including fixed and adaptive ones. Furthermore, the authors show how to apply the theory of difference equations to the general problem of speech enhancement, and deduce a number of noise reduction filters, including the maximum SNR filter, the Wiener filter, the MVDR filter, etc. Also covered in the book are the difference equations and differential beamforming from the spectral graph perspective.

Jacob Benesty received a Master degree in microwaves from Pierre & Marie Curie University, France, in 1987, and a Ph.D. degree in control and signal processing from Orsay University, France, in April 1991. During his Ph.D. (from Nov. 1989 to Apr. 1991), he worked on adaptive filters and fast algorithms at the Centre National d'Etudes des Telecommunications (CNET), Paris, France. From January 1994 to July 1995, he worked at Telecom Paris University on multichannel adaptive filters and acoustic echo cancellation. From October 1995 to May 2003, he was first a Consultant and then a Member of the Technical Staff at Bell Laboratories, Murray Hill, NJ, USA. In May 2003, he joined the University of Quebec, INRS-EMT, in Montreal, Quebec, Canada, as a Professor. He is also an Adjunct Professor with Aalborg University, Denmark, a Guest Professor with Northwestern Polytechnical University, Xi’an, China, and a Visiting Professor with the Technion, Haifa, Israel. His research interests are in signal processing, acoustic signal processing, and multimedia communications. He is the inventor of many important technologies. In particular, he was the lead researcher at Bell Labs who conceived and designed the world-first real-time hands-free full-duplex stereophonic teleconferencing system. Also, he conceived and designed the world-first PC-based multi-party hands-free full-duplex stereo conferencing system over IP networks. He is the editor of the book series Springer Topics in Signal Processing. He was the general chair and technical chair of many international conferences and a member of several IEEE technical committees. Four of his journal papers were awarded by the IEEE Signal processing Society and in 2010 he received the Gheorghe Cartianu Award from the Romanian Academy. He has co-authored and co-edited/co-authored numerous books in the area of acoustic signal processing.

Israel Cohen received the B.Sc. (Summa Cum Laude), M.Sc. and Ph.D. degrees in electrical engineering from the Technion in 1990, 1993 and 1998, respectively. From 1990 to 1998, he was a Research Scientist with RAFAEL Research Laboratories, Haifa, Israel Ministry of Defence. From 1998 to 2001, he was a Postdoctoral Research Associate with the Computer Science Department, Yale University, New Haven, CT. In 2001 he joined the Electrical Engineering Department of the Technion- Israel Institute of Technology, Haifa, Israel. He is currently a Professor of electrical engineering at the Technion and a Visiting Professor at Northwestern Polytechnical University, Xi'an, Shaanxi, China. He is a Fellow of the IEEE for contributions to the theory and application of speech enhancement. He is a recipient of the Alexander Goldberg Prize for Excellence in Research, and the Muriel and David Jacknow Award for Excellence in Teaching. He serves as a member of the IEEE Audio and Acoustic Signal Processing Technical Committee and the IEEE Speech and Language Processing Technical Committee. He served as Associate Editor of the IEEE Transactions on Speech and Audio Processing and IEEE Signal Processing Letters. He is a coeditor of the Multichannel Speech Processing Section of the Springer Handbook of Speech Processing (Springer, 2008), a coauthor of Noise Reduction in Speech Processing (Springer, 2009), a coeditor of Speech Processing in Modern Communication: Challenges and Perspectives (Springer, 2010), and a General Cochair of the 2010 International Workshop on Acoustic Echo and Noise Control. His research interests are statistical signal processing, analysis and modeling of acoustic signals, speech enhancement, noise estimation, microphone arrays, source localization, blind source separation, system identification and adaptive filtering.


Jingdong Chen received the Ph.D. degree in pattern recognition and intelligence control from the Chinese Academy of Sciences in 1998. From 1998 to 1999, he was with ATR Interpreting Telecommunications Research Laboratories, Kyoto, Japan, where he conducted research on speech synthesis, speech analysis, as well as objective measurements for evaluating speech synthesis. He then joined the Griffith University, Brisbane, Australia, where he engaged in research on robust speech recognition and signal processing. From 2000 to 2001, he worked at ATR Spoken Language Translation Research Laboratories on robust speech recognition and speech enhancement. From 2001 to 2009, he was a Member of Technical Staff at Bell Laboratories, Murray Hill, New Jersey, working on acoustic signal processing for telecommunications. He subsequently joined WeVoice Inc. in New Jersey, serving as the Chief Scientist. He is currently a professor at the Northwestern Polytechnical University in Xi'an, China. His research interests include acoustic signal processing, adaptive signal processing, speech enhancement, adaptive noise/echo control, microphone array signal processing, signal separation, and speech communication. He served as an Associate Editor of the IEEE Transactions on Audio, Speech, and Language Processing from 2008 to 2014 and is currently a technical committee (TC) member of the IEEE Signal Processing Society (SPS) TC on Audio and Electroacoustics, and a member of the editorial advisory board of the Open Signal Processing Journal. He was the Technical Program Co-Chair of the 2009 IEEE Workshop on Applications of Signal Processing to Audio and Acoustics (WASPAA) and the Technical Program Chair of IEEE TENCON 2013, and helped organize many other conferences. He received the 2008 Best Paper Award from the IEEE Signal Processing Society (with Benesty, Huang, and Doclo), the best paper award from the IEEE Workshop on Applications of Signal Processing to Audio and Acoustics (WASPAA) in 2011 (with Benesty), the Bell Labs Role Model Teamwork Award twice, respectively, in 2009 and 2007, the NASA Tech Brief Award twice, respectively, in 2010 and 2009, the Japan Trust International Research Grant from the Japan Key Technology Center in 1998, and the Young Author Best Paper Award from the 5th National Conference on Man-Machine Speech Communications in 1998. He is a Fellow of the IEEE for contributions to microphone array processing and speech enhancement in noisy and reverberant environments.