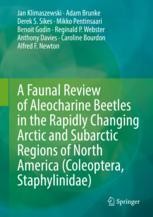 A Faunal Review of Aleocharine Beetles in the Rapidly Changing Arctic and Subarctic Regions of North America (Coleoptera, Staphylinidae)

Arctic and Subarctic North America is particularly affected by climate change, where average temperatures are rising three times faster than the global average. Documenting the changing climate/environment of the north requires a structured knowledge of indicator taxa that reflect the effects of climate changes.Aleocharine beetles are a dominant group of forest insects, which are being used in many projects as indicators of environmental change. Many species are forest specialists restricted to certain microhabitats, some are generalists and others are open habitat specialists. They represent many ecological niches and, as such, are good indicators for many other species as well. The majority of Canadian aleocharine beetle species (about 600 spp.) has been studied and published by Jan Klimaszewski et al. (2018, 2020), mainly from southern, central, and western Canada, while the northern taxa remain poorly known and documented. The aim of the present book is to summarize the knowledge on this insect group in the Arctic and Subarctic North America and to provide a diagnostic and ecological tool for scientists studying and monitoring insects in northern Canada and Alaska. The book includes a review of the literature, information on 238 species and their habitats, taxonomic review, images, and identification tools.

Jan Klimaszewski is a research scientist at the Laurentian Forestry Centre, Natural Resources Canada, Quebec City. He graduated from the University of Wroclaw, Poland, and held research positions at: Lyman Entomological Museum, McGill University, Quebec, Canada; Transvaal Museum, Pretoria, South Africa; National Insect Collection, Auckland, New Zealand; and BC Research, Vancouver, Canada. His research deals with taxonomy and ecology of Coleoptera, and particularly the speciose family Staphylinidae (Aleocharinae). Many species of this beetle family are sensitive indicators of forest change and are useful in environment impact studies. He has fruitful collaboration with research scientists all over the world. His research also deals with adventive species of Coleoptera in Canada and USA. He published over 170 scientific articles and over 12 books.

Adam Brunke is a research scientist at the Canadian National Collection of Insects, Arachnids and Nematodes (Agriculture and Agri-Food Canada). He has conducted research at the University of Guelph (Canada), University of Copenhagen (Denmark) and the Natural History Museum of Vienna (Austria). His research focuses on the phylogeny, taxonomy, classification and biogeography of rove beetles (Staphylinidae) using both morphological and molecular evidence.  Fieldwork has taken him to Costa Rica, Myanmar, Vietnam, Bolivia and the southern and western United States. He has published over 30 articles on rove beetles, described over 50 new species and published a higher-level reclassification of subfamily Staphylininae.

Derek S. Sikes is Alaska's first curator of Insects for the University of Alaska Museum and Professor of Entomology in the Department of Biology and Wildlife at the University of Alaska Fairbanks, Derek Sikes has spent the last 13 years exploring Alaska, working to improve the Alaskan state insect collection, teaching systematics and entomology to University of Alaska Fairbanks students and the public, and expanding knowledge of Alaska's most numerous animals. Dr. Sikes is a specialist on the evolution and taxonomy of the carrion beetle subfamily Nicrophorinae, which includes the behaviorally complex burying beetles.

Mikko Pentinsaari is a postdoctoral fellow at the Centre for Biodiversity Genomics, University of Guelph. His research focuses on DNA barcoding and its various applications in species identification and taxonomy, with a special interest in beetles. He obtained a PhD from the University of Oulu, Finland, and moved to Canada in 2017 to work on DNA barcode reference libraries for Canadian Coleoptera.

Benoit Godin is a former Head of Environmental Assessment with Environment and Climate Change Canada in Whitehorse, Yukon. His areas of expertise are the environmental impact assessment for major industrial projects using aquatic and terrestrial insects, and the biogeography of Aleocharinae in Western Canada.

Reginald Webster is a self-employed entomologist and a Research Associate with the New Brunswick Museum. He obtained a PhD from Michigan State University and has held postdoctoral positions at Duke University in North Carolina, University of Massachusetts, and Laval University in Quebec. His research interests deal with the Coleoptera and Lepidoptera of New Brunswick, focusing on the taxonomy and biology of rove beetles (Staphylinidae), especially the Aleocharinae. Other interests include the conservation of endangered insects in Canada and the protection of old-growth forests forests in New Brunswick. He has published over 90 peer-reviewed publications based on this research and has co-authored the descriptions of over 50 species of Coleoptera, mostly in the staphylinid subfamily Aleocharinae.

Anthony Davies has been providing research, curatorial and technical support for coleopterists at the the Canadian National Collection of Insects, Arachnids and Nematodes, since 1971, including J.M. Campbell, A. Smetana and P. Bouchard, while identifying several families of beetles for the National Identification Service, specializing in the Staphylinoidea. He was a contributing author in both editions of the “Checklist of Beetles of Canada and Alaska”, the “Reclassification of the North Temperate Taxa Associated with Staphylinus Sensu Lato” (with A. Smetana), the “Catalogue of Palaearctic Coleoptera”, “Family Group Names in Coleoptera”, two volumes of “Adventive Species of Coleoptera Recorded from Canada”, and the two books on eastern Canadian and British Columbian aleocharine beetles, as well as smaller revisionary studies. He is also frequently called upon to review publications dealing with Coleoptera.

Caroline Bourdon is a forestry technician who graduated from CEGEP de Ste-Foy, Quebec. She works as a research technician at the Laurentian Forestry Centre, Natural Resources Canada, where she is involved in many projects in forest entomology and pathology. She participated in research leading to 22 publications for this Center.

Alfred F. Newton is a Curator Emeritus at the Field Museum of Natural History in Chicago. His research is primarily on the taxonomy, classification, phylogeny and evolution of rove beetles (Staphylinidae) and related beetle groups. He has conducted more than three years of field work worldwide, mainly in the United States, Mexico, Chile, Australia and New Zealand, and has produced more than 135 peer-reviewed research publications as well as many scientific notes and reports, and contributed to building several internet resources including the Staphylinoidea and Hydrophiloidea parts of the Catalogue of Life.