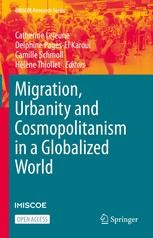 Migration, Urbanity and Cosmopolitanism in a Globalized World

This open access book draws a theoretically productive triangle between urban studies, theories of cosmopolitanism, and migration studies in a global context. It provides a unique, encompassing and situated view on the various relations between cosmopolitanism and urbanity in the contemporary world. Drawing on a variety of cities in Latin America, Europe, Asia, Africa and North America, it overcomes the Eurocentric bias that has marked debate on cosmopolitanism from its inception. The contributions highlight the crucial role of migrants as actors of urban change and targets of urban policies, thus reconciling empirical and normative approaches to cosmopolitanism. By addressing issues such as cosmopolitanism and urban geographies of power, locations and temporalities of subaltern cosmopolites, political meanings and effects of cosmopolitan practices and discourses in urban contexts, it revisits contemporary debates on superdiversity, urban stratification and local incorporation, and assess the role of migration and mobility in globalization and social change.

Catherine Lejeune is associate professor of American studies at Université de Paris, France. She holds a PhD in Ethnic and Migration studies from Paris Diderot University. Her interests include US immigration law and policy. She explores the ways in which local actors in US cities respond to immigration and she investigates the emergence of “local-level” policy-making in the absence of national immigration reform. While her recent research lied with the determinants of irregular migration in a comparative perspective (USA-Europe), her current interests lie with undocumented migrants in global cities, primarily US immigrant youths, their lives as almost ordinary city residents in a highly diverse context and as emergent political subjects.

Delphine Pagès-El Karoui is a graduate of ENS Fontenay-St Cloud, Lyon, France, who holds an agrégation and speaks Arabic and has been an associate professor in geography at INALCO since 2006. She teaches Middle East geography at the Arabic Studies Department. Her research addresses Egyptian migrations (transnational networks and diasporas in Europe and the Gulf, imaginaries in literature and cinema…); the spatial dimensions of Arab revolutions; urban diversity and cosmopolitanism in Gulf cities. She recently obtained two grants to foster collaboration and organize conferences with the Asian Research Institute (ARI) of National University of Singapore (NUS). Since Oct. 2017, she has been working part-time as a project officer on for the General Directorate for Research and Innovation (DGRI) at the French Ministry of Higher Education.

Camille Schmoll completed a doctoral thesis at the University of Paris Nanterre, France, (2004) and a Marie Curie post-doctorate at the European University Institute, Florence, Italy (2005-2007). Currently a junior fellow of Institut Universitaire de France she is an associate professor in geography at University of Paris Diderot, member of the CNRS team “Géographie-cités” and a fellow of Institut Convergences Migrations. She is currently member of the scientific commission in charge of the permanent exhibition at Cité Nationale de l’Histoire de l’Immigration. Her research topics include international migration; gender and space; urban approaches to migration patterns; cosmopolitanism and borders; gender generation and the family in international migration; qualitative approaches to migration.

Hélène Thiollet is a CNRS, France, permanent researcher. Her research focuses on the politics of migration and asylum in the Global South, and she focuses her empirical research on the Middle East and Sub-Saharan Africa. She teaches international relations, comparative politics and migration studies at Sciences Po. She is a graduate from the Ecole normale supérieure (Ulm A/L98), holds a PhD in Political Science from Sciences Po and Master degrees in Geography of development (University of Paris 1 La Sorbonne) and Classics (University of Paris 4 La Sorbonne). In 2002-2003 she was a Visiting Student at the Harvard University Department of Government, with a fellowship from the Harvard Graduate School of Arts and Sciences. She was a Post Doctoral Fellow at Oxford University in 2009-2010 with the OxPo Research grant and is now a Research partner at the International Migration Institute at Oxford.