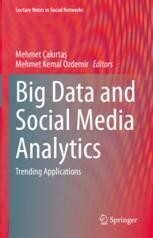 This edited book provides techniques which address various aspects of big data collection and analysis from social media platforms and beyond. It covers efficient compression of large networks, link prediction in hashtag graphs, visual exploration of social media data, identifying motifs in multivariate data, social media surveillance to enhance search and rescue missions, recommenders for collaborative filtering and safe travel plans to high risk destinations, analysis of cyber influence campaigns on YouTube, impact of location on business rating, bibliographical and co-authorship network analysis, and blog data analytics. All these trending topics form a major part of the state of the art in social media and big data analytics. Thus, this edited book may be considered as a valuable source for readers interested in grasping some of the most recent advancements in this high trending domain.

Dr. Mehmet Çakırtaş completed his doctorate in the field of Islamic History at Ankara University, Ankara, Turkey in 2007. Between 2007 and 2011 he worked as an administrator in various units of the Radio and Television Supreme Council, Turkey. He worked as a Consultant at the Turkish Prime Ministry between 2011-2014. Between 2014-2017 he worked as the Head of the International Relations and Monitoring and Evaluation Department at the Radio and Television Supreme Council, Ankara, Turkey. He participated in the development of the Digital Recording and Analysis System in Turkey. Between 2017-2020, he worked as Executive Assistant of the Turkish Minister of Justice, the Turkish Deputy Prime Minister and the Turkish Minister of Health. Currently, he is the Head of the International Relations Department at the Radio and Television Supreme Council in Turkey. 2018-2019’da Ankara He worked as part-time instructor at Yildirim Beyazit University, Ankara, Turkey. His research interests include Islamic History, social media analysis and the study of radical Islamic groups.

Dr. Ozdemir received his B.S. and M.S. degrees in electrical engineering from METU, Ankara, Turkey, in 1996 and 1998, and his Ph.D. degree in electrical engineering from Syracuse University, USA, in 2005.  He also obtained a Business Management Certificate from University of Toronto in 2010. Dr. Ozdemir has an industry experience of 15+ years, where he developed systems for CATV and wireless communication industries.  He is currently with Department of Electrical and Electronics Engineering, Istanbul Medipol University, Turkey.  His recent research interests include the application of deep learning to the wireless communication systems, such as jamming detection and spectrum sensing.