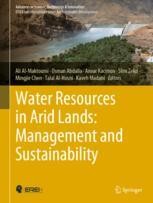 This book presents the most recent innovative studies in the field of water resources for arid areas to move towards more sustainable management of the resources. It gathers outstanding contributions presented at the 2nd International Water Conference on Water Resources in Arid Areas (IWC), which was held online (Muscat, Oman) in November 2020. Papers discuss challenges and solutions to alleviate water resource scarcity in arid areas, including water resources management, the introduction of modern irrigation systems, natural groundwater recharge, construction of dams for artificial recharge, use of treated wastewater, and desalination technologies. As such, the book provides a platform for the exchange of recent advances in water resources research, which are essential to improving the critical water situation and to move towards more sustainable management of water resources.

Dr. Ali Al-Maktoumi: is an Associate professor of groundwater hydrology at the department of Soil, Water, and Agriculture Engineering, and the Director of Water research center, Sultan Qaboos University, Oman. His research focus on water resources management in an arid area, which includes groundwater modeling/hydrology, the efficiency of recharge dams, and hydro-pedology. Through a number of awarded grants, he established scientific collaboration with Utrecht University, Delft University of Technology, UNESCO-IHE, California Institute of Technology, Jet Prolusion Laboratory-NASA, University of Nebraska-Lincoln, and University of Jordan. This international collaboration resulted in a number of excellent publications and professional scholarly activities.
Dr. Osman Abdalla is an associate professor of hydrogeology at the department of Earth sciences, Sultan Qaboos University, Oman. His research bridges several areas of physical and chemical hydrogeology in arid areas and intends to develop a solid platform for hydrogeological and environmental research and training of an international standard with emphasis on groundwater recharge. Dr. Abdalla has established many international and regional collaborations, been awarded major grants and published several articles in reputable international journals.

Dr. Slim Zekri is Professor and Head of the Department of Natural Resource Economics at Sultan Qaboos University (SQU) in Oman. He earned his Ph.D. in Agricultural Economics and Quantitative Methods from the University of Cordoba, Spain. He is an Associate Editor of the journal of Water Economics and Policy.  Dr. Zekri has worked as a consultant for a range of national and international agencies on natural resource economics, policy and governance, agriculture, and water economics in the Middle East and North Africa. He is a member of the Scientific Advisory Group of the FAO’s Globally Interesting Agricultural Heritage Systems. His main research interests are in Water Economics & Policy and Environmental Economics. In 2017 he was awarded the Research and Innovation Award in Water Science from the Sultan Qaboos Higher Center for Culture & Science in the Scientific Publications Category.

Dr. Talal Al-Hosni holds a BSc in Earth Sciences (1999) from Sultan Qaboos University (Oman) and an MSc in Hydrogeology (2001) from Birmingham University (UK). He received a scholarship from Oman government in 2003 to continue with his PhD study in chemical Hydrogeology at Melbourne University (Australia). After his PhD in 2007, Al-Hosni joined the Department of Earth Sciences at Sultan Qaboos University as an Assistant professor in the area of Hydrogeology and Environmental Geology. He worked as a Theme Supervisor (Omani Land) in the Omani Encyclopedia for the period 2008-2009. Since 2012, he is a member of the scientific Committee for the Oman Mountains Atlas Project. Talal is one of the Oman representatives in Group B of the CTBTO. He was the deputy director in the Center for Environmental Studies and Research at Sultan Qaboos University (2018-2019) and is now the head of Earth Sciences Department. He is a geology expert in the courts of Oman. Areas of interest: mainly hot springs, groundwater recharge, intra-aquifers mixing, and usage of bottled water and its impact. Al-Hosni contributed to teaching a number of courses including environmental geology and hydrogeology and developed a number of training courses in the area of EIA of mining and groundwater management. Kaveh Madani is an environmental scientist, educator, and activist, working at the interface of science, policy, and society. He has previously served as the Deputy Vice President of Iran in his position as the Deputy Head of Iran’s Department of Environment, the Vice President of the UN Environment Assembly Bureau, and Chief of Iran’s Department of Environment’s International Affairs and Conventions Center. He is currently a Henry Hart Rice Senior Fellow at the MacMillan Center for International and Area Studies of Yale University and a Visiting Professor at the Centre for Environmental Policy (CEP) of Imperial College London. He has received a number of awards for his research, teaching, as well as outreach and humanitarian activities, including the New Faces of Civil Engineering recognition in 2012, the Arne Richter Award for Outstanding Young Scientists in 2016, the Walter Huber Civil Engineering Research Prize in 2017, and the Hydrologic Sciences Early Career Scientist Award in 2019.