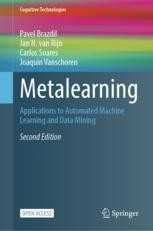 This open access book offers a comprehensive and thorough introduction to almost all aspects of metalearning and AutoML, covering the basic concepts and architecture, evaluation, datasets, hyperparameter optimization, ensembles and workflows, and also how this knowledge can be used to select, combine, compose, adapt and configure both algorithms and models to yield faster and better solutions to data mining and data science problems. It can thus help developers to develop systems that can improve themselves through experience.

This book is a substantial update of the first edition published in 2009. It includes 18 chapters, more than twice as much as the previous version. This enabled the authors to cover the most relevant topics in more depth and incorporate the overview of recent research in the respective area. The book will be of interest to researchers and graduate students in the areas of machine learning, data mining, data science and artificial intelligence.

Pavel B. Brazdil is a senior researcher at LIAAD INESC TEC, Porto and Full Professor at FEP, University of Porto, Portugal and since 2019, Professor Emeritus. He obtained his PhD in machine learning in 1981 at the University of Edinburgh. Since the 1990s he has pioneered the area of metalearning and supervised various PhD students in this area. His main interests lie in machine learning, data mining, algorithm selection, metalearning, AutoML and text mining, among others. He has edited 6 books and more than 110 papers referenced on Google Scholar, of which approximately 80 are also on ISI/DBLP/Scopus. He was a program chair of various machine learning conferences (e.g., in 1992,2005), has co-organized various workshops on metalearning and acted as a co-editor of two special issues of MLJ on this topic. He is a member of the editorial board of the Machine Learning Journal and a Fellow of EurAI.

Jan N. van Rijn obtained his PhD in Computer Science in 2016 at Leiden Institute of Advanced Computer Science (LIACS), Leiden University (the Netherlands). During his PhD, he made several funded research visits to the University of Waikato (New Zealand) and University of Porto (Portugal). After obtaining his PhD, he worked as a postdoctoral researcher in the Machine Learning lab at University of Freiburg (Germany), headed by Prof. Dr. Frank Hutter, after which he moved to work as a postdoctoral researcher at Columbia University in the City of New York (USA). He currently holds a position as assistant professor at LIACS, Leiden University. His research aim is to democratize the access to machine learning and artificial intelligence across societal institutions. He is one of the founders of OpenML.org, an open science platform for machine learning. His research interests include artificial intelligence, automated machine learning and metalearning.

Carlos Soares is an Associate Professor at the Faculty of Engineering of U. Porto. Carlos is also an External Advisor for Intelligent Systems at Fraunhofer Portugal AICOS, a researcher at LIACC and a collaborator at LIAAD-INESC TEC. He is also a lecturer at the Porto Business School. The focus of his research is on metalearning/autoML but he has a general interest in Data Science. He has participated in 20+ national and international R&ID, as well as consulting projects. Carlos regularly collaborates with companies, including recent projects with Feedzai, Accenture and InovRetail. He has published/edited several books and 150+ papers in journals and conferences, (90+/125+ indexed by ISI/Scopus) and supervised 10+/50+ Ph.D./M.Sc. theses. Recent participation in the organization of events, includes ECML PKDD 2015, IDA 2016 and Discovery Science 2021 as programme co-chair. In 2009, he was awarded the Scientific Merit and Excellence Award of the Portuguese AI Association.

Joaquin Vanschoren is a tenured Assistant Professor of machine learning at the Eindhoven University of Technology (TU/e). He received his PhD from the Katholieke Universiteit Leuven, Belgium. His research focuses on the automation of machine learning (AutoML) and metalearning. He founded and leads OpenML.org, an online platform used all over the world for sharing machine learning data, algorithms, and models. He also chairs the Open Machine Learning Foundation, and co-chairs the W3C Machine Learning Schema Community Group. He is the recipient of an Amazon Research Award, an Azure Research Award, the Dutch Data Prize, and an ECMLPKDD demonstration award. He is a co-author and co-editor of the book “Automatic Machine Learning: Methods, Systems, Challenges”. He has been tutorial speaker at NeurIPS, AAAI, and ECMLPKDD, and an invited speaker at ECDA, StatComp, AutoML@ICML, CiML@NeurIPS, DEEM@SIGMOD, AutoML@PRICAI, MLOSS@NeurIPS, and many other occasions. He was general chair at LION 2016, datasets and benchmarks chair at NeurIPS 2021, program chair of Discovery Science 2018, demo chair at ECMLPKDD 2013, and he co-organizes the AutoML and Meta-Learning workshop series at NeurIPS and ICML from 2013 to 2021.