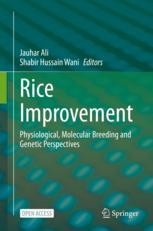 This book is open access under a CC BY 4.0 license.
By 2050, human population is expected to reach 9.7 billion. The demand for increased food production needs to be met from ever reducing resources of land, water and other environmental constraints. Rice remains the staple food source for a majority of the global populations, but especially in Asia where ninety percent of rice is grown and consumed. Climate change continues to impose abiotic and biotic stresses that curtail rice quality and yields. Researchers have been challenged to provide innovative solutions to maintain, or even increase, rice production. Amongst them, the ‘green super rice’ breeding strategy has been successful for leading the development and release of multiple abiotic and biotic stress tolerant rice varieties. Recent advances in plant molecular biology and biotechnologies have led to the identification of stress responsive genes and signaling pathways, which open up new paradigms to augment rice productivity. Accordingly, transcription factors, protein kinases and enzymes for generating protective metabolites and proteins all contribute to an intricate network of events that guard and maintain cellular integrity. In addition, various quantitative trait loci associated with elevated stress tolerance have been cloned, resulting in the detection of novel genes for biotic and abiotic stress resistance. Mechanistic understanding of the genetic basis of traits, such as N and P use, is allowing rice researchers to engineer nutrient-efficient rice varieties, which would result in higher yields with lower inputs. Likewise, the research in micronutrients biosynthesis opens doors to genetic engineering of metabolic pathways to enhance micronutrients production. With third generation sequencing techniques on the horizon, exciting progress can be expected to vastly improve molecular markers for gene-trait associations forecast with increasing accuracy.
This book emphasizes on the areas of rice science that attempt to overcome the foremost limitations in rice production. Our intention is to highlight research advances in the fields of physiology, molecular breeding and genetics, with a special focus on increasing productivity, improving biotic and abiotic stress tolerance and nutritional quality of rice.

Dr. Jauhar Ali is currently the Head of the Hybrid Rice Development Consortium and Leader for the Hybrid Rice Breeding Cluster in the Rice Breeding Platform at International Rice Research Institute. He is an agricultural graduate with honors in crop sciences from the prestigious Punjab Agricultural University, Ludhiana (India). He took his master’s (1990) and doctorate degrees (1993) in Plant Genetics from the Indian Agricultural Research Institute, New Delhi. He did his post-doctoral fellowships at IRRI in 1994 and later between 2000-2003. He is a hybrid rice breeder, who has significantly contributed to the development and release of multiple-stress tolerant inbred (61 varieties) and 24 hybrid varieties, and capacity-building for strengthening global agricultural research. He has developed and characterized eight thermo-sensitive genic male sterile (TGMS) rice lines, for which he was awarded the Jawaharlal Nehru Award for outstanding Ph.D. thesis research work in 1994. Using these materials led to the development of several TGMS-based hybrids involving different centers.  Also, he had been instrumental in the development of the Green Super Rice breeding technology at IRRI, being the project leader and regional coordinator of the Green Super Rice (GSR) Project in Asia and Eastern and Southern Africa.  For his immense contribution, he received the “Leadership” Award from the CAAS President in 2019. He has published more than 100 peer-reviewed publications.  He is currently the Academic Editor of PLoS One Journal and has reviewed more than 50 research articles from top research journals. Successfully, guided and mentored more than 33 (Ph.D., and MS) students and 14 (On-Job Trainees, Visiting Scientists, Visiting Research Fellows) at IRRI from different countries. He has also provided training to more than 2,100 researchers, especially on hybrid rice technology, seed production, and molecular breeding.​
Dr. Shabir Hussain Wani is working as Scientist cum Assistant Professor (senior scale), Plant Breeding and Genetics at Mountain Research Centre for Field Crops, Khudwani, and SKUAST-Kashmir India. He received Ph.D. in plant breeding and genetics on “transgenic rice for abiotic stress tolerance” from the Punjab Agricultural University Ludhiana, India. He teaches courses related to plant breeding, seed science and technology, and stress breeding and has published more than 200 papers/chapters in journals and books of international and national repute. He served as guest editor and reviews editor for journal Frontier in Plant Science (2015-2018). He has also edited several books on current topics in crop improvement for abiotic stress tolerance published by Springer Nature and CRC press USA. He also served as visiting Scientist at Department of Plant Soil and Microbial Sciences, Michigan State University, USA under the UGC Raman Post Doctoral Fellowship programme. He has attended several international and national conferences, presenting his research.