Mathematics
Springer Optimization and Its Applications 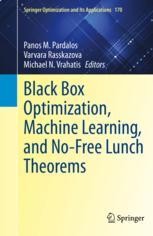 This edited volume illustrates the connections between machine learning techniques, black box optimization, and no-free lunch theorems. Each of the thirteen contributions focuses on the commonality and interdisciplinary concepts as well as the fundamentals needed to fully comprehend the impact of individual applications and problems.  Current theoretical, algorithmic, and practical methods used are provided to stimulate a new effort towards innovative and efficient solutions. The book is intended for beginners who wish to achieve a broad overview of optimization methods and also for more experienced researchers as well as researchers in mathematics, optimization, operations research, quantitative logistics, data analysis, and statistics, who will benefit from access to a quick reference to key topics and methods. The coverage ranges from mathematically rigorous methods to heuristic and evolutionary approaches in an attempt to equip the reader with different viewpoints of the same problem.

​Panos M. Pardalos serves as distinguished professor of industrial and systems engineering at the University of Florida. Additionally, he is the Paul and Heidi Brown Preeminent Professor of industrial and systems engineering. Professor Pardalos is also an affiliated faculty member of the computer and information science department, the Hellenic Studies Center, and the biomedical engineering program. Additionally, he serves as the director of the Center for Applied Optimization. Professor Pardalos is a world leading expert in global and combinatorial optimization. His recent research interests include network design problems, optimization in telecommunications, ecommerce, data mining, biomedical applications, and massive computing. Panos Pardalos is a prolific author who lectures all over the world. He is the recipient of a multitude of fellowships and awards, the most recent of which is the Humboldt Research Award (2018).
Varvara A. Rasskazova is a Researcher and Senior Lecture in Moscow Aviation Institute. The area of scientific interests is discrete optimization and guaranteed approximation algorithms for solving transportation and assignment problems on Railway and Metallurgical Production. She is an active participant of regular international conferences on Operations Research and Mathematical Programming, and author of more than 40 publications.

Michael N. Vrahatis focuses on mathematics, natural computing and computational intelligence, global optimization, reliable computing and imprecise data, artificial neural networks and machine learning. He has participated in the organization of over 300 conferences serving at several positions, and participated in more than 240 conferences, congresses and advanced schools as active participant, speaker or keynote speaker. He has been a visiting research fellow in many different institutions including Cornell, MIT, CERN, and INRIA. He is a professor in the Department of Mathematics at the University of Patras since 2000. He is also serving as the director of the newly founded Institute of Artificial Intelligence of University of Patras. The corpus of his work consists of over 400 publications. According to Google Scholar his work has been cited more than 16000 times (h-index 56).