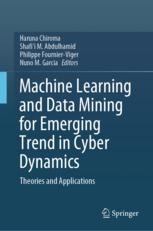 This book addresses theories and empirical procedures for the application of machine learning and data mining to solve problems in cyber dynamics. It explains the fundamentals of cyber dynamics, and presents how these resilient algorithms, strategies, techniques can be used for the development of the cyberspace environment such as:

The book presents new machine learning and data mining approaches in solving problems in cyber dynamics. Basic concepts, related work reviews, illustrations, empirical results and tables are integrated in each chapter to enable the reader to fully understand the concepts, methodology, and the results presented. The book contains empirical solutions of problems in cyber dynamics ready for industrial applications.

The book will be an excellent starting point for postgraduate students and researchers because each chapter is design to have future research directions.

Haruna Chiroma received B.Tech., M.Sc., and Ph.D. degrees in computer science from Abubakar Tafawa Balewa University, Bayero University Kano and University of Malaya, respectively. He is an associate editor for Telecommunication, Computing, Electronic and Control Journal and an editorial board member for Recent advances in Computer Science and Communications.  He has published over 100 academic articles, and edited the book Advances on Computational Intelligence in Energy- The Applications of Nature-Inspired & Metaheuristic Algorithms in Energy.  He has been a technical programme committee member for more than 20 international conferences. Presently, Dr Chiroma is supervising 7 M.Sc. students and 2 Ph.D., 3 M.Sc. completed thesis at Abubakar Tafawa Balewa University, Bauchi, Nigeria as visiting senior lecturer and a senior lecturer at the Federal College of Education (Technical), Gombe, Nigeria.

Professor Philippe Fournier-Viger is a Canadian researcher. Five years after completing his Ph.D., he came to China and became full professor at the Harbin Institute of Technology (Shenzhen), after obtaining a title of national talent from the National Science Foundation of China. He has published more than 240 research papers in refereed international conferences and journals, which have received more than 4000 citations . He is the founder of the popular SPMF open-source data mining library, which provides more than 150 algorithms for identifying various types of patterns in data. The SPMF software has been used in more than 630 papers since 2010 for many applications from chemistry, smartphone usage analysis restaurant recommendation to malware detection. He edited the book High Utility Pattern Mining: Theory, Algorithms and Applications. He is also co-organizer of the Utility Driven Mining and Learning workshop at KDD 2018 and ICDM 2019, which are the two most important conferences in data mining. He is program committee chair of various international conferences such as BDA 2019 and IEA AIE 2020, and editor-in-chief of the Data Science and Pattern Recognition journal.

Nuno M. Garcia holds a PhD in Computer Science Engineering (2008) and a 5-year BSc in Mathematics / Informatics (Hons.) (2004) from the Universidade da Beira Interior. He was a member of the Research Team at Siemens SA (2004-2007) and Nokia Siemens SA (2007-2008), and Head of Research at PLUX SA (2008-2010). Currently serving as Vice Dean of the Faculty of Engineering at UBI (2018-), he is an Assistant Professor at the Computer Science Department at UBI (2010-) and Invited Associate Professor at the Universidade Lusófona de Humanidades e Tecnologias (Lisbon, Portugal, 2010-). He was the founder and is a researcher of the Assisted Living Computing and Telecommunications Laboratory (ALLab, 2010), a research group within the Instituto de Telecomunicações at UBI. He was also co-founder and is Chair of the Executive Council of the BSAFE LAB – Law enforcement, Justice and Public Safety Research and Technology Transfer Laboratory, a multidisciplinary research laboratory in UBI (2015). He is the coordinator of the Cisco Academy at UBI (2010-) and was Chair of the COST Action IC1303 AAPELE – Architectures, Algorithms and Platforms for Enhanced Living Environments (Brussels, Belgium, 2013-2017).