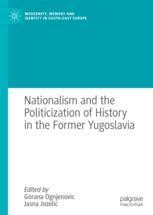 Nationalism and the Politicization of History in the Former Yugoslavia

​“This book is very timely: the instrumentalization of history for political goals has become a pressing issue and worrisome feature of many polities, to the point of challenging even the most consolidated democracies. Focusing on Yugoslavia’s fragile successor states, the authors explore plurifold analytical levels, including local, regional, transnational, European and global perspectives. The authors comprehensively demonstrate how politicizing history, in the postwar and postcommunist societies of what was once Yugoslavia, has prevented both reconciliation and democratization.”

“Ognjenovic and Jozelic focus here on the former Yugoslavia before and after its fragmentation to explore and evaluate the various uses of histories by nationalists, both those who promoted ‘federal nationalism’ and those who peddle specific local nationalisms in successor states. The book deals specifically with the Western Balkans, but these developments have their parallels in many other parts of the world, and the book will be useful well beyond the region on which the study is based.”

“The former Yugoslavia has become a battlefield for the ‘Memory Wars’, in spite of the wealth of judicially established facts and available evidences gathered about the atrocities in the region, and various initiatives aimed at dealing with the past and efforts at transitional justice. Focusing on three periods of Yugoslav history – the Second World War, socialist Yugoslavia and the Yugoslav wars of 1991–2001 – the contributors show that despite these efforts to deal with the past, sustainable peace and reconciliation across ethnic and religious groups remain a distant aim.”

This book analyzes how nationalists in the former Yugoslavia have politicized history to further their political agendas, retaining and prolonging conflict among different cultural and religious groups, and impeding the process of lasting reconciliation. It explores how narratives have been (mis)used, drawing on examples from all of the former Yugoslav republics. With contributors from a range of disciplinary backgrounds, it provides a vital assessment of how nationalists have attempted to (re)shape public collective memory and relativize facts.

Book Title
Nationalism and the Politicization of History in the Former Yugoslavia
Editors
Series Title
Modernity, Memory and Identity in South-East Europe
Copyright
2021
Publisher
Palgrave Macmillan
Copyright Holder
The Editor(s) (if applicable) and The Author(s), under exclusive license to Springer Nature Switzerland AG