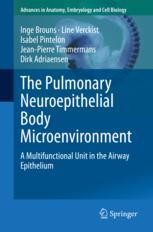 A Multifunctional Unit in the Airway Epithelium

Complexly organized NEBs are an integral part of the intrapulmonary airway epithelium of all air-breathing vertebrates. For decades a quest has been going on to unravel the functional significance of these intriguing structures that appear to be modified in the course of many pulmonary diseases. The NEB microenvironment (ME) is composed of organoid clusters of pulmonary neuroendocrine cells (PNECs) that are able to store and release neurotransmitters and are closely contacted by extensive nerve terminals, emphasizing a potential receptor/effector role and probable signalling to the central nervous system. PNECs are largely shielded from the airway lumen by a special type of Clara cells, the Clara-like cells, with potential stem cell characteristics. So far, functional studies of the pulmonary NEB ME revealed that PNECs can be activated by various mechanical and chemical stimuli, resulting in a calcium-mediated release of neurotransmitters. In the past decades, a number of publications have exposed NEBs as potential hypoxia sensors. Recent experimental evidence unveiled that the NEB ME is a quiescent stem cell niche in healthy postnatal lungs, and silencing may involve bone morphogenetic protein signalling mediated by vagal afferents. Only an integrated approach that takes all current information into account will be able to explain the full role of the pulmonary NEB ME in health and disease.

This highly informative and carefully presented book, provides insights for researchers, PhD students with an interest in (bio)medical and veterinary science, especially in the field of the autonomic innervation of the lung, chemo-and mechanoreceptors

Dr. Inge Brouns obtained her PhD in 2002 under supervision of Profs. Adriaensen and Timmermans exploring the neurochemical coding and complex innervation pattern of pulmonary neuroepithelial bodies. She published >40 full papers mainly focusing on pulmonary sensory receptors and was first author of a previous edition published in 2012. She is currently working as coordinator for educational affairs within the Laboratory of Cell Biology & Histology.

Dr. Line Verckist obtained her PhD in 2018 under supervision of Dr. Brouns and Prof. Adriaensen. She focused her research on the microenvironment of pulmonary neuroepithelial bodies being a potential stem cell niche in the airway epithelium.

Dr. Isabel Pintelon obtained her PhD in 2007 under supervision of Prof. Adriaensen unraveling the neurochemical characteristics of sensory pulmonary and pleura receptors, and in situ functional imaging in ex vivo lung models. She is currently research manager and core facility manager within the Laboratory of Cell Biology & Histology.

Prof. Jean-Pierre Timmermans obtained his PhD in zoological sciences in 1987 and completed his habilitation in 1994. Since 2003, he is full professor at the Department of Veterinary Sciences of the University of Antwerp, where he is chair of the Laboratory of Cell Biology and Histology and director of the Antwerp Centre for Advanced Microscopy (ACAM). His main research interests relate to the autonomic nervous system, with specific attention to neuroimmune interactions in the gastrointestinal and respiratory tracts. His recent research activities are focused on the brain-gut-microbiome axis. He is (associated) editor of several international journals. He is a foreign member of the Deutsche Akademie der Naturforscher Leopoldina. He is a former president of the Royal Belgian Society for Microscopy, the International Society of Autonomic Neuroscience and the Anatomische Gesellschaft. He is a fellow of the American Association of Anatomists and an honorary fellow of the Anatomische Gesellschaft. He is (co-)author of over 330 peer-reviewed articles having received more than 9,700 citations (WoS) so far.

Prof. Dirk Adriaensen obtained his PhD in biological sciences in 1994 with an extensive study on the comparative functional histology of the pulmonary neuroepithelial endocrine system. In 2001, he obtained a research professorship, is currently full professor at the Laboratory of Cell Biology & Histology, and leads a research team that focusses on experimental lung research and the development of models for functional molecular microscopic imaging of the pulmonary neuroepithelial body (NEB) microenvironment (ME). His main interest has been to unravel the complex interactions between neuroendocrine cells, a multitude of central nerve terminals and a supposed population of stem cells within the NEB ME, and its potential involvement in repair after injury and in the pathogenesis of small cell lung carcinoma. He is currently President of the Royal Belgian Society for Microscopy. He is (co-)author of over 130 peer-reviewed papers that have been cited more than 3500 times.