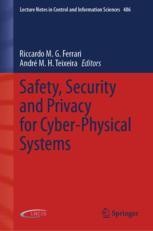 This book presents an in-depth overview of recent work related to the safety, security, and privacy of cyber-physical systems (CPSs). It brings together contributions from leading researchers in networked control systems and closely related fields to discuss overarching aspects of safety, security, and privacy; characterization of attacks; and solutions to detecting and mitigating such attacks.

The book begins by providing an insightful taxonomy of problems, challenges and techniques related to safety, security, and privacy for CPSs. It then moves through a thorough discussion of various control-based solutions to these challenges, including cooperative fault-tolerant and resilient control and estimation, detection of attacks and security metrics, watermarking and encrypted control, privacy and a novel defense approach based on deception. The book concludes by discussing risk management and cyber-insurance challenges in CPSs, and by presenting the future outlook for this area of research as a whole.

Its wide-ranging collection of varied works in the emerging fields of security and privacy in networked control systems makes this book a benefit to both academic researchers and advanced practitioners interested in implementing diverse applications in the fields of IoT, cooperative autonomous vehicles and the smart cities of the future.

Riccardo M. G. Ferrari received the Laurea degree (Cum Laude and printing honours) in Electronic Engineering in 2004 and the Ph.D. degree in Information Engineering in 2009, both from the University of Trieste, Italy. He held both academic and industrial R&D positions, in particular as Researcher in the field of process instrumentation and control for the steel-making sector, at Danieli Automation S.p.A. (Italy). He is currently Assistant Professor in Fault Tolerant Control with the Delft Center for Systems and Control, Delft University of Technology, The Netherlands. His research interests include fault diagnosis and attack detection in large-scale cyber-physical systems, with applications to cooperative autonomous vehicles, wind energy and industrial control systems. He is the recipient of the 2005 Giacomini Award of the Italian Acoustic Society and was granted a Marie Curie Individual Fellowship from the EU in 2016. He received an Honourable Mention for the Paul M. Frank Award at the IFAC SAFEPROCESS 2018 and won an Airbus Award at IFAC 2020 for the best contribution to the competition on Aerospace Industrial Fault Detection. He is a member of the IFAC Technical Committees TC 6.2 on Mining, Mineral and Metal Processing and TC 6.4 on Fault Detection, Supervision & Safety of Technical Processes (SAFEPROCESS).

André M. H. Teixeira is Associate Senior Lecturer at the Division of Signals and Systems, Department of Electrical Engineering, Uppsala University, Sweden. He received the M.Sc. degree in Electrical and Computer Engineering from the Faculdade de Engenharia da Universidade do Porto in 2009, and the Ph.D. degree in automatic control from the KTH Royal Institute of Technology in 2014. From October 2015 to August 2017, Dr. Teixeira was Assistant Professor in Cybersecurity of Critical Infrastructures at the Faculty of Technology, Policy and Management, Delft University of Technology, The Netherlands. His research interests include secure and resilient control systems, distributed fault detection and isolation, distributed optimization, power systems, and multiagent systems. Dr. Teixeira was a recipient of the Best Student Paper Award from the IEEE Multi-Conference on Systems and Control in 2014 and an Honourable Mention for the Paul M. Frank Award at the IFAC SAFEPROCESS 2018. He was awarded a Starting Grant by the Swedish Research Council in 2019, and he is among the 20 young researchers in Sweden that received the Future Research Leaders 7 grant by the Swedish Foundation for Strategic Research in 2020.