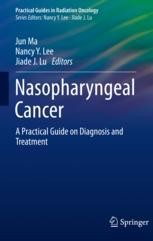 A Practical Guide on Diagnosis and Treatment

This book provides up-to-date guidance that will assist radiation oncologists during the day-to-day management of nasopharyngeal cancer. After discussion of diagnosis and staging, target delineation techniques and treatment planning are described for both intensity-modulated and particle radiation therapy. Detailed information is then presented on the application of radiation therapy in different disease settings, from early stage disease to metastatic disease. Due attention is paid to the role of multimodality treatment and new and advanced technologies in particular circumstances, such as local recurrence. In addition, follow-up and the management of late toxicities are explained and management strategies are documented for special situations and groups, including pediatric patients. The book is published within the Springer series Practical Guides in Radiation Oncology. Like other volumes in the series, it is designed for hands-on use by both radiation oncology residents and practicing radiation oncologists. It will also be of value for head and neck physicians.

Dr. Ma is currently the Professor of Department of Radiation Oncology, Sun Yat-sen University Cancer Center, State Key Laboratory of Oncology in South China, China. He is also the Vice President of Sun Yat-sen University Cancer Center. His research was focused on nasopharyngeal carcinoma (NPC). He has been regarded as one of the leading researchers in NPC all around the world. In 2018, he was appointed as Planning Team Member for the Naso-pharyngeal Cancer Clinical Trials Planning Meeting of the U.S. National Cancer Institute. He has conducted a series of high-quality clinical trials and basic researches with results published in world-renowned medical journals, including NEJM, Lancet, Lancet Oncology, JCO, BMJ, JAMA Oncology, Cell Research and Annals of Oncology. Seven of his research results have been adopted by prestigious guidelines. As the team leader, he has won the Second Prizes of the National Awards for Progress in Science and Technology in 2009 and 2015, and the National Innovation Awards in 2017.
Dr. Nancy Y. Lee is a world-renowned radiation oncologist specialized in head and neck cancer. She has extensive experience in the use of IMRT for head and neck cancer as well as being the lead PI for multiple cooperative trials. She has co-authored close to 300 papers and written numerous book chapters as well as being the editor for two books focused on target delineation of cancer treatment.  In the era of precision medicine, proton beam and/or heavy particle therapy can further enhance the therapeutic effects of tumor relative to the surrounding normal tissue.  Nancy currently serves as the Vice Chair of the Department of Radiation Oncology, Experimental Therapeutics.  She is also the Chief of Head and Neck Radiotherapy at the Memorial Sloan Kettering Cancer Center.