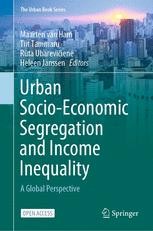 Maarten van Ham is Professor of Urban Geography at Delft University of Technology in the Netherlands, and Professor of Geography at the University of St Andrews in the UK. In Delft, he leads the Urban Studies group and is head of the Department of Urbanism at the Faculty of Architecture and the Built Environment. Van Ham studied economic geography at Utrecht University, where he obtained his PhD with honours in 2002. In 2011, he was appointed full Professor in both St Andrews and Delft. Van Ham has published over 110 academic papers and 11 edited books. He is a highly cited academic with research projects in the UK, The Netherlands, Germany, Sweden, Finland, Lithuania, Estonia, Spain, and China. Maarten has expertise in the fields of urban poverty and inequality, segregation, residential mobility and migration; neighbourhood effects; urban and neighbourhood change; housing market behaviour and housing choice; geography of labour markets; spatial mismatch of workers and employment opportunities. In 2014, van Ham was awarded a 2 million Euro ERC Consolidator Grant for a 5-year research project on neighbourhood effects (DEPRIVEDHOODS).
Tiit Tammaru is Professor of Urban and Population Geography and Head of the Chair of Human Geography at the Department of Geography, University of Tartu. He is the member of the Estonian Academy of Sciences. Tammaru leads the development of longitudinal linked censuses and registers data for urban and population geographic studies in Estonia. He was trained in human geography and received a doctoral degree from the University of Tartu in 2001. In 2018 he was a Visiting Professor at the Neighbourhood Change and Housing research group at the Department OTB – Research for the Built Environment, Faculty of Architecture and the Built Environment, Delft University of Technology. He has also worked a guest researcher at the Department of Geography, University of Utah, and Department of Geography, Umeå University. He is the Editorial Board member of Social Inclusion. Tammaru is theorizing the paradigmatic shift in segregation studies from residential neighborhood approach to activity space-based approach. Together with colleagues from Delft and Tartu he is developing the concept of vicious circle of segregation that focusses on how social and ethnic inequality and segregation are produced and reproduced across multiple life domains: homes, workplaces, schools, leisure time activity sites.
Rūta Ubarevičienė is a researcher with a background in urban and regional geography as well as sociology. Rūta has successfully defended two PhD thesis in these fields. In 2017 she obtained PhD degree from Delft University of Technology, and in 2018 from Lithuanian Social Research Centre. Currently Rūta is a postdoctoral researcher in the Urban Studies research group at the Department of Urbanism, Delft University of Technology and in the Institute of Human Geography and Demography at the Lithuanian Social Research Centre. Using spatial analysis and statistical techniques, she analyses global and local spatial processes of the social and economic systems. Her research interests include socio-spatial inequalities, social segregation, depopulation, internal migration, and post-socialist change.
Heleen Janssen is an Assistant Professor in the Urban Studies research group at the Department of Urbanism of Delft University of Technology. She is a social scientist with a background in Sociology and Criminology and received her doctoral degree from Utrecht University in 2016. Her main research interests include urban sociology, crime and delinquency, spatial inequality, segregation, ethnic diversity, social cohesion and neighborhood effects. Heleen is affiliated to the independent research group Space, Contexts, and Crime at the Max Planck Institute for the Study of Crime, Security and Law (Freiburg, Germany). Heleen has previously worked at the Max Planck Institute for Foreign and International Criminal Law (Freiburg, Germany) and the Netherlands Institute for the Study of Crime and Law Enforcement (NSCR; Amsterdam, the Netherlands).