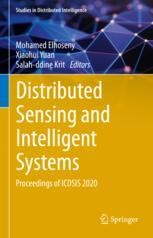 This book is the proceeding of the 1st International Conference on Distributed Sensing and Intelligent Systems (ICDSIS2020) which will be held in The National School of Applied Sciences of Agadir, Ibn Zohr University, Agadir, Morocco on February 01-03, 2020. ICDSIS2020 is co-organized by Computer Vision and Intelligent Systems Lab, University of North Texas, USA as a scientific collaboration event with The National School of Applied Sciences of Agadir, Ibn Zohr University. ICDSIS2020 aims to foster students, researchers, academicians and industry persons in the field of Computer and Information Science, Intelligent Systems, and Electronics and Communication Engineering in general. The volume collects contributions from leading experts around the globe with the latest insights on emerging topics, and includes reviews, surveys, and research chapters covering all aspects of distributed sensing and intelligent systems. The volume is divided into 5 key sections: Distributed Sensing Applications; Intelligent Systems; Advanced theories and algorithms in machine learning and data mining; Artificial intelligence and optimization, and application to Internet of Things (IoT); and Cybersecurity and Secure Distributed Systems.
This conference proceeding is an academic book which can be read by students, analysts, policymakers, and regulators interested in Distributed Sensing, Smart Network approaches, Smart Cities, IoT Applications, and Intelligent Applications. It is written in plain and easy language, and describes new concepts when they appear first so that a reader without prior background of the field finds it readable. The book is primarily intended for research students in sensor networks and IoT applications (including intelligent information systems, and smart sensors applications), academics in higher education institutions including universities and vocational colleges, policy makers and legislators.

Dr. Mohamed Elhoseny is an Assistant Professor at the Department of Computer Science, College of Computer & Information Technology, American University in the Emirates (AUE). Dr. Elhoseny is an ACM Distinguished Speaker and IEEE Senior Member. He received his Ph.D. in Computers and Information from Mansoura University/University of North Texas through a joint scientific program. Dr. Elhoseny is the founder and the Editor-in-Chief of IJSSTA journal published by IGI Global. Also, he is an Associate Editor at IEEE Journal of Biomedical and Health Informatics, IEEE Access, Scientific Reports, IEEE Future Directions, Remote Sensing, and International Journal of E-services and Mobile Applications. Moreover, he served as the co-chair, the publication chair, the program chair, and a track chair for several international conferences published by recognized publishers such as IEEE and Springer. Dr. Elhoseny is the Editor-in-Chief of the Studies in Distributed Intelligence Springer Book Series, the Editor-in-Chief of The Sensors Communication for Urban Intelligence CRC Press-Taylor& Francis Book Series, and the Editor-in-Chief of The Distributed Sensing and Intelligent Systems CRC Press-Taylor& Francis Book Series.

Dr. Xiaohui Yuan received a Ph.D. degree in Computer Science from the Tulane University in 2004. He is currently an Associate Professor in the Department of Computer Science and Engineering, University of North Texas. He is the director of the Computer Vision and Intelligent Systems Lab at the University of North Texas. His research interests include computer vision, data mining, machine learning, and artificial intelligence. His research is supported by Air Force Lab, National Science Foundation, Texas Advanced Research Program, Oak Ridge Associated Universities, and UNT. His research findings are reported in over 130 peer-reviewed papers. Dr. Yuan is a recipient of Ralph E. Powe Junior Faculty Enhancement award in 2008 and the Air Force Faculty Fellowship in 2011, 2012, and 2013. He also received two research awards and a teaching award from UNT in 2007, 2008, and 2012, respectively. He served on the editorial board of several international journals and guest-edited several special issues. He is the general chair, program committee chairs, and session chairs in many conferences. He also serves as a panel reviewer for funding agencies including NSF, NASA, NIH, and Louisiana Board of Regent’s Research Competitiveness program.