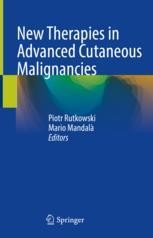 This book provides a detailed overview of the activity and efficacy of new treatments and promising perspectives in the field of cutaneous malignancies. The first part of the book covers the basic molecular and immunological mechanisms. It then goes on to cover specific strategies in melanoma and non-melanoma skin cancers that, starting from the basic mechanisms, translate this information into clinical routine or translational research.

This unique handbook comprises very practical structured descriptions of more than 10 new agents used in treatment of melanomas and skin carcinomas together with biological background of their mechanisms of action. It provides structured and up-to-date information about all therapeutics in cutaneous malignancies, making it extremely useful in clinical practice, for clinicians that need timely and focused information.

Prepared by a group of international authors from expert melanoma centres in Europe, the book provides knowledge distilled from the diverse perspectives of the contributing authors (pathologists, translational scientists and clinicians). This book is of interest to medical oncologists, oncological surgeons, dermatologists and immunologists as well as biologists and pharmacologists.

Show all
About the authors
Piotr Rutkowski is Professor of Surgical Oncology at the Maria Sklodowska-Curie National Research Institute of Oncology in Warsaw, Poland.  Dr Rutkowski is the current Head of the Department of Soft Tissue/Bone Sarcoma and Melanoma, the Plenipotentiary Director of Institute for Clinical Trials at the Maria Sklodowska-Curie Institute – Oncology Center as well as the VicePresident of Scientific Council of Maria Sklodowska-Curie Institute – Oncology Center. He has participated in several investigator-driven trials in melanoma and sarcoma. He is also Coordinator of the Polish Clinical GIST Registry, and a reviewer for several international scientific journals, as well as a member of the Editorial Board of Annals of Surgical Oncology and European Journal of Surgical Oncology. Dr Rutkowski is an active member of the EORT^14000), and is co-author of national and international recommendations for sarcoma and melanoma. He is working very closely with national patient advocacy groups for GIST/sarcoma and melanoma and is Chairman of the Melanoma Academy in Poland. Chair of Task Group of Ministry of Health, Poland for National Oncological Strategy.
Dr. Mario Mandalà is associate professor of Medical oncology at University of Perugia. He received his medical degree from the Faculty of Medicine, Catholic University of Rome, Italy. He completed residency trainings in Medical Oncology and Haematology and since then he has consistently been active in medical research. He was previously Head of the Melanoma Unit, Division of Oncology, Papa Giovanni XXIII Hospital in Bergamo, Italy.  In this position, he coordinated a prospective outcome research project and several clinical trials investigating new therapeutic strategies (including target therapies and immunotherapies) in melanoma and gastrointestinal cancer patients. He was recently appointed Coordinator of the Mucosal and Ocular Melanoma Section of the Italian Rare Cancers Network. Since 2011, he chaired the scientific and organizing committees of the Clinical and Translational Research Working Group of the Italian Melanoma Intergroup (IMI).  From 2017 to 2019 Dr Mandalà was secretary of IMI. Since 2019 Dr Mandalà has been appointed as new elected president of the group Italian Melanoma Intergroup (IMI). Dr Mandalà has been recently appointed chairman of the advanced systemic treatment of the EORTC melanoma group. He is full member of the European Society of Medical Oncology. He is Reviewer for several scientific journals, including Journal of Clinical Oncology, Lancet Oncology, Cancer, British Journal of Cancer, European journal of cancer, Annals of Oncology, Cancer Treatment Review, Journal of Thrombosis and Haemostasis, Thrombosis and Haemostasis, Arteriosclerosis-Thrombosis and Vascular Biology, Critical Reviews in Oncology and Haematology. He has authored more than 190 publications and his major scientific interests are clinical and translational research on melanoma, gastrointestinal cancer and thromboembolic complications in cancer patients. Since 2008, he gave major contributions in ESMO and AIOM on the management of Melanoma as well as venous thromboembolism in solid tumours.
Show all